An Interview with Robert Benson

Frederic talks to the author on why he wrote Moving Miss Peggy about his mother's dementia and what families can learn from it.

Robert Benson is acclaimed writer who leads retreats and workshops on writing and the contemplative life around the country. He lives in Nashville, Tenneessee. He is profiled as in the Living Spiritual Teachers Project of this website.

Robert's latest book is an account of the experiences his family went through when it came time to move his mother after she was diagnosed with dementia. In our review we called Moving Miss Peggy a " lucid, touching, and spiritually rich account of his mother's process of change." Frederic then asked Robert to talk about the lessons to be gleaned from this story.

Frederic: What compelled you to write this book?

Robert: One hears so many bad stories about families going through this, and our experience, while very difficult because of the fact of it, was not as hard as some of what you hear and read about. I thought it was important to say something to people to encourage them to do the hard work that has to be done, to get the help from professionals that they need, and to hold their family close while they do.

I think people put off doing what needs to be done because they are afraid, and putting it off only makes it worse. It is fine to be afraid. It is not so fine to wish it would go away.

And my mother even said to me that I have to write about this — "Maybe we can help some of those old people," she said. Telling our story seemed to be a way to help the people who are supposed to help the ones who suffer.

Frederic: Physician and writer Lewis Thomas has called dementia "the worst of all diseases, not just for what it does to the patient but for its devastating effects on families and friends." Could you comment on this?

Robert: My father died some 25 years ago; one day he was alive, the next morning he was gone. We all miss him still and wish he was here, but we were able to grieve together and then press on. Miss Peggy disappears a little bit more each week, and so the grieving goes on and on. It is a world of a thousand goodbyes and, as someone else said, a thousand hellos.

Frederic: Miss Peggy is upset by the loss of her independence. Which loss seemed to have bothered her most?

Robert: After my father's death, my mother lived a very rich life and traveled a lot. I think that she most misses being able to go where she wants when she wants. She said to me one day not too long ago, "I am not ever going to get to anywhere again, am I?" And the answer is that she cannot. That is the hardest thing for her, and it was one of the hardest conversations we had to have with her.

Frederic: What feelings did you have as a caregiver for your mother? Talk a bit about your various feelings during this experience. Which surprised you?

Robert: The first feeling that comes to mind is anxiety — How do we care for her? How do we pay for caring for her? How can we help her not to be so afraid?

The second one is loss. The day when it finally sunk in that she was going to slowly go away and never come back was a very hard day.

One of the unexpected feelings was the affection for the caregivers that we feel at the place where she lives now. Their joyous and generous care of her has warmed our hearts.

The last, and most surprising for me, is the anger I feel. The disease is a thief, it has stolen Miss Peggy from herself and from all of us who love her. And it makes me angry, very angry.

Frederic: What touched your heart most about your family during this ordeal?

Robert: Like most families, Miss Peggy's children live different lives, very different — different cities, different vocations, different lifestyles. What was lovely, at least to me, was that we fell in love with each other again when we began to do the things that needed to be done to help Miss Peggy move into a new way of living. We divided up the things that needed to be done, counted on each other to do them, and stayed in touch with each other more than we had done in years. No conversation between any of us ends now without "I love you" and "I love you, too."

Frederic: What spiritual lessons did you learn from your mother? your brothers and sister? your Christian faith?

Robert: My mother has long been known for her hospitality. The call to and the art of and the spiritual nature of that hospitality is at the heart of my faith. She never talked about it in those sorts of terms; she simply welcomed people and took care of people her whole life. Perhaps a way to say it is that she lived one long parable — a parable I am grateful to have been a witness to and perhaps even a part of.

Frederic: For us, Moving Miss Peggy is a tribute to love and its different permutations. Please share what you hope readers will take away from their reading of the book.

Robert: First, that if they have a sense that a parent or a spouse or a loved one is about to enter the world of dementia, then the sooner they begin the hard work, the better. It does not get better next week, it gets harder. Love is something you do, to steal a phrase from someone who is a far better writer than me.

The second is that professional help is vital — not just doctors who diagnose the disease, but specialists in elder law and insurance practice. It is a very complicated world, and it is easy to make huge mistakes. Run, do not walk to someone who can help you wade your way through the maze of it.

Finally, that it is possible, if you begin sooner rather than later, if you do so holding on to each rather than pushing against each other, that a family can go into this season without distrust and acrimony. The disease is awful, but the way a family deals with it does not have to be. The one you love, the one who loved you well, deserves nothing less from those who say they love them. 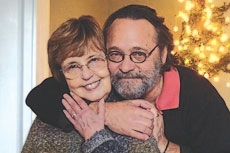