By Matthew Gilbert
Experiments and movements to bring more meaning to the business world and marketplace.

A 2002 Yankelovich Monitor survey found that two-thirds of sampled Americans believed that companies had little interest in whether their actions were serving the public good. This perception has grown in the wake of the Enron scandal and other widespread examples of corporate malfeasance. The documentary The Corporation reveals that the mandate of this organization is to make money for its stockholders, no matter what happens to other people or the good Earth. Most egregious is the fact that the total U.S. federal taxes paid by corporations has steadily decreased; and guess who has to pick up the slack? Is there any hope that these things will change in the business world sometime soon? Matthew Gilbert (Take This Job and Love It) offers his positive answers in response to this pressing question.

This well-organized paperback contains four sections. The first charts the rise of conscious business companies where "trust, truth, equality, and unity are replacing control, fear, privilege and fragmentation as legitimate principles and practices." Gilbert also points to some of the ways in which individuals are trying to invest their labors with passion and purpose. The second section presents an analysis of the forces of history that have led to the present impasse which goes way beyond labor and management battles. Gilbert is convinced that our work ethic, the frenzied pursuit of profit, and the conflict between business values and human values must be re-addressed with imagination and vigor. The last two sections describe some of the experiments that have been launched to bring more meaning to the workplace, from the Corporate Responsibility program to the application of Buddhist principles to the marketplace. Gilbert lays out seven steps to corporate transformation and six tools for remaking our work. The latter includes starting from where you are, applying a beginner's mind, the power of mindfulness, the tao of service, start the day with intention, and find moments of solitude. Hopefully, these efforts by groups and individuals will help restore trust in business and bring meaning to our work. 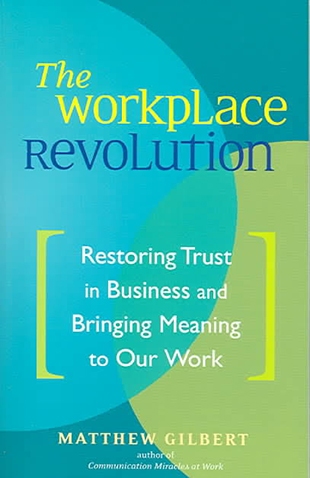