By Mark Nepo
An important and soul-stirring work on the spiritual values that can enable the American Dream to once again flourish and prosper.

In his important 1985 work Habits of the Heart: Individualism and Commitment in American Life, Robert Bellah and his colleagues used the findings of Alexis de Tocqueville as a starting point for a study of the impulses driving American society. Their goal was to identify what resources citizens have for making sense of their lives, how they think about themselves and their society, and to relate these to their actions. Editor Mark Nepo (The Exquisite Risk: Daring to Live an Authentic Life), who is a program officer at the Fetzer Institute, talks a bit about that pioneering work in his introduction to this collection of essays on the American Dream by distinguished thinkers and writers. This new project began six years ago at the Fetzer Institute as a probe of "the inner life of democracy, the way that its citizens are formed, and the role of the spirit in our civic life together." The eight essays here were also published and distributed as free pamphlets to a diverse constituency. The issues addressed in them have been assessed in community colleges in eleven cities and in classrooms to engender dialogue among students on America and its present condition. This series will continue with an examination of Exploring the Global Dream.

Some of the questions which form the foundation for this important and meaningful dialogue are: What is the American Dream today? What is working and what is missing? What is essential but hidden or dormant? How do we connect the dream of America with the dream of the world? What is the role in our culture for spiritual values like love and forgiveness? And how can humanity best be served by integrating the inner life of the mind and spirit with the outer life of action and service in the world?

The book is divided into four sections. Part One, Looking and Listening for America, contains the essays "Two Dreams of America" by Jacob Needleman and "Footprints of the Soul: Uniting Spirit with Action in the World" by Carolyn T. Brown. Part Two, Suffering the American Dream, contains "Created Equal: Exclusion and Inclusion in the American Dream" by Elaine H. Pagels and "The Grace and Power of Civility: Commitment and Tolerance in the American Experience" by David M. Abshire. Part Three, Deepening the American Dream, contains "Breaking the Cultural Trance: Insight and Vision in America" by Robert Inchausti, and "From Cruelty to Compassion: The Crucible of Personal Transformation" by Gerald G. May. Part Four, Participating in the World's Soul, contains "Opening the Dream: Beyond the Limits of Otherness" by the Rev. Cannon Charles Gibbs, and "The Politics of the Brokenhearted: On Holding the Tensions of Democracy" by Parker J. Palmer.

The interplay between history, spirituality, and current events is what makes this volume such a soul-stirring experience to read and to ponder. We have identified 37 spiritual practices common to all the world's religions, and over the years we have found that these practices are crucial to both personal and societal transformation. We were pleased to see references to many of them as key qualities needed in any discussion of the American Dream. Among them are the concept of connections, or what Thich Nhat Hanh calls "interbeing." Our times call out for people to seek and cherish interdependence.

Another spiritual practice that holds great potential as an antidote to incivility is kindness. The spiritual practice of hospitality is sorely needed in these contentious times when people write off those who are seen as different or strange. In his fine essay, Parker Palmer states: "The holiest thing we have to offer the world is a broken-open heart, emptied of fear and vengeance, filled with forgiveness and a willingness to take the risks of love. And we can offer our hearts only by becoming disciples of the heart's own imperatives." Although he does not use the word reverence, he ends with a plea to end violence, which is violating the identity and integrity of the other.

It is indeed hopeful and salutary that this cultural document puts so much emphasis on spiritual values as being crucial to the health and enduring value of democracy in the twenty-first century. Now if we all would just practice them in our daily lives, the American Dream could once again flourish and prosper. 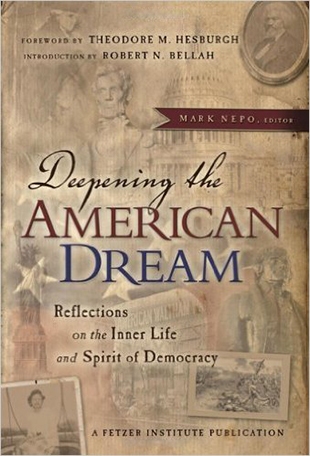