By Eknath Easwaran
Focuses on the concrete aspects of spiritual practice that can transform character, conduct, and consciousness.

Born in India, Eknath Easwaran established the Blue Mountain Center of Meditation in Berkeley, California, in 1961. This is the first of a three-volume series that offers a commentary on his translation of the Bhagavad Gita. Unlike many other scriptural interpreters, Easwaran rarely gets lost in abstractions. He focuses on the concrete aspects of spiritual practice that can transform character, conduct, and consciousness.

Again and again, the Bhagavad Gita emphasizes the unity of all life; the need for each person to follow his or her own spiritual path; the necessity of eschewing separation and selfishness; the value of moving beyond pain and pleasure to joy; and the truth that self-realization comes through grace. Easwaran refers to some of his favorite spiritual teachers who include Mahatma Gandhi, Sri Ramakrishna, St. Francis of Assissi, Meister Eckhart, and his own spiritual mentor, his beloved grandmother.

Readers of this accessible paperback will learn about yoga, meditation, vegetarianism, repeating the mantram, dealing with a samskara, keeping the senses free from attachment and aversion, and cultivating a positive, constructive state of mind. The wisdom contained in The End of Sorrow demonstrates why Eknath Easwaran is one of the most eminent spiritual teachers in the world today. 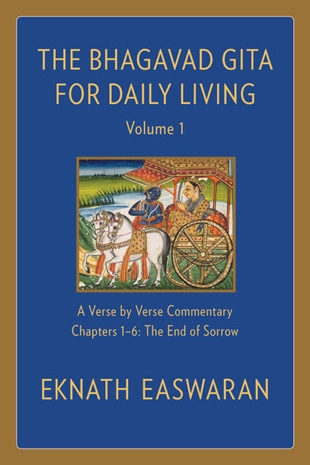