Writing from the Center

By Scott Russell Sanders
A top-notch collection of essays about savoring place and community.

Scott Russell Sanders is a Professor of English at Indiana University, and his work has been selected for the Associated Writing Programs Award in Creative Nonfiction, the Ohioana Book Award, Best American Essays, and the Kenyon Review Award for Literary Excellence. In this collection of 12 essays, Sanders again proves himself to be a master of the medium.

"Some editors and fellow writers have asked me, directly or indirectly, how I can bear to live in a backwater. I tell them there are no backwaters. There is only one river, and we are all in it. Wave your arm, and the ripples will eventually reach me. For the writer, for anyone, where you live is less important than how devotedly and perceptively you inhabit that place. I stay here in the Midwest out of affection for the land, the people, the accents and foods, the look of towns and lay of farms, for the trees and flowers and beasts. I also stay from a sense of responsibility. Every acre of the planet could use some steady attention. I open my eyes on a place that has scarcely been written about. However great or small my talents, here is where they will do the most good."

Sanders elaborates on the importance of having a deep appreciation for the place where we live. The growing homogenization of America is diminishing regional accents, local foods, homegrown and distinctive ways of doing things. He laments the fact that kids don't learn much about the history and flora and fauna of their neighborhood but are able to talk freely about media, music, and movies: "Children who can identify a brand of sneakers from fifty yards away can learn to identify trees and bushes, flowers and mushrooms. Any child or adult who can recognize a pop tune from the opening three notes can learn to recognize the songs of neighborhood birds. Anyone who can recite dialogue from a hit movie or follow the plot of a soap opera should be able to grasp the natural history of a bioregion."

Sander salutes the values of community which nourish and sustain us. He revels in the connections we feel with the good Earth, which constantly surprises us. These offer a stay against dangerous trends: "What we have too often neglected, in our revulsion against tyranny and our worship of the individual, is the common good. The results of that neglect are visible in the decay of our cities, the despoiling of our land, the fouling of our rivers and air, the haphazard commercial sprawl along our highways, the gluttonous feeding at the public trough, the mortgaging of our children's and grandchildren's future through our refusal to pay for current consumption. Only a people addicted to private pleasure would allow themselves to be defined as consumers — rather than conservers or restorers — of the earth's abundance."

Whether writing about a pilgrimage to the abandoned farm of his boyhood, walking in the woods, or baking bread with his daughter, Sanders sheds light on what it means to be centered, to have a home territory that feeds one's soul and provides many avenues of personal fulfillment. 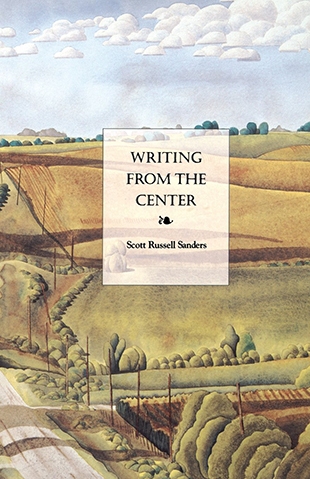