By Andrew Harvey, Mary Ford-Grabowsky
A sturdy anthology of writings, poems, and meditations on Mary, the Mother of Jesus.

This sturdy paperback is part of the Skylight Illuminations series edited by Andrew Harvey. Mary Ford-Grabowsky is an award-winning author and teacher in the field of theology and spirituality. After receiving her doctorate from Princeton Theological Seminary, she taught in the religious studies department at Regis College, edited the journal Fellowship in Prayer, and became academic dean of the University of Creation Spirituality. She has gathered together a wide range of material from writers and theologians, ancient and modern, from Eastern and Western backgrounds on Mary, the mother of Jesus.

In the foreword, Andrew Harvey sums up the sweep of this influential religious figure:

"Mary's role in the birth of Christ-consciousness, an unfolding that begins with her relatively minor role in the Gospel, expands through her growing glorification in the third and fourth century CE, explodes in the many-sided ecstatic celebration of her mystical power and glory in the late Middle Ages — in the visions of Dante, Julian of Norwich, and Hildegard of Bingen — and comes to a triumphant consummation in the work of the prophetic Marian mystic of the eighteenth century, Louis-Marie Grignon de Montfort's . . . tremendous vision of Mary as a cosmic Mother-force that is indispensable and crucial to the birth of authentic Christ-consciousness in apocalyptic times."

The chapter headings give you an idea of the themes covered here: Mary in Scripture; Legends About Mary; Mary, Image of Our Possibilities; Mary, Source of Power and Grace; Mary, Mother of Us All; Mary, Our Intercessor; Mary, in Our Sorrow; On Pilgrimage with Mary; and In Praise of Mary.

Ford-Grawbowsky quotes Jarislav Pelican on Mary's universality: "She fits in everywhere, and offers something to everyone." Life magazine estimated that the prayer "Hail Mary" is said two billion times every day, and each year five to ten million people make a pilgrimage to Our Lady of Guadalupe in Mexico City; many others visit Marian sites elsewhere in the world. This saint is prayed to as advocate and helper, and even in the sports area there is a reference to her power: the last desperate pass by a losing football team is called a "Hail Mary." 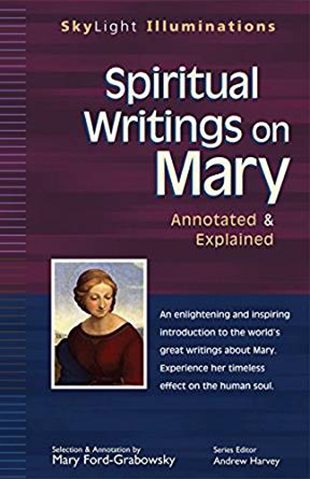