The Other Side of the Mountain The Journals of Thomas Merton, Volume Seven, 1967-1968

By Patrick Hart, Thomas Merton
A glimpse of what a renovated and reverent Christianity could be in our pluralistic world.

The seventh and final volume of Thomas Merton's journals, edited by Patrick Hart, covers the period from October of 1967 through his accidental and untimely death at 53 years of age in Bangkok on December 10, 1968. Merton's incredible energy, creativity, intellectual verve, and fervent faith are all on display in this extraordinary book. Here he is enthusing over Basho's travel notes, calling them "one of the most beautiful books I have ever read in my life." There he is listening to Bob Dylan, reading Lenny Bruce, and commenting on the religious significance of a pro football game.

The Catholic monk's visits to monasteries in New Mexico and Northern California contain some of his most evocative writing. Again and again, Merton yearns for a monastic retreat that would insure him total solitude. He considers one in Alaska after spending some time there.

Merton's zigzagging spiritual journey is summed up in his pilgrimage to Asia where he marvels over Calcutta, meets with the Dalai Lama, talks with Islamic scholars, learns more about Hinduism, and dialogues with Tibetan monks about the contemplative life. His questing, hospitable, imaginative, and devotional Christianity shines brightly. The Other Side of the Mountain offers a brief glimpse of what a renovated and reverent Christianity could be in our pluralistic world. 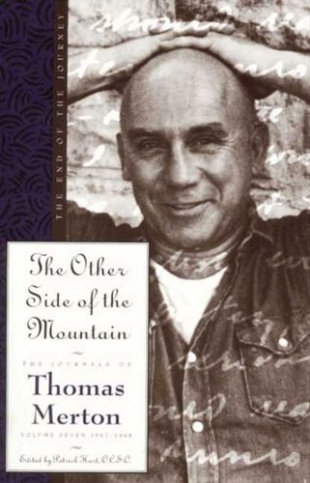