By Jim Wallis
Charts the spiritual revival and zeal for social change and justice in America that has been sparked by some unusual religious coalitions.

In this passionately presented follow-up to his national bestseller God's Politics: Why the Right Gets It Wrong and The Left Doesn't Get It, Jim Wallis charts a sea change in America sparked by a spiritual revival "that could provide the tipping point in finding solutions to the biggest and most significant moral and social crises of our world today." The founder of Sojourners, a global faith and justice network, asserts that many members of the Religious Right are moving beyond the issues of abortion and gay marriage to a broader and deeper social agenda. Equally startling is the renewal of interest in a fresh approach to faith and progressive politics among those on the left — including Democrats. This "great awakening," says Wallis, is creating a better faith and a better politics.

Many moral mentors can guide and inspire us on the path of justice fueled by religious faith — Mahatma Gandhi, Martin Luther King, Jr., Dietrich Bonhoeffer, Dorothy Day, Oscar Romero, and others. Wallis rightly contends that "the world is especially waiting for a new social and political agenda drawn not from bickering partisan loyalties, blatant ideological bias, or corrupting special interests, but rather from our deepest moral values."

The monologue of the Religious Right is over, and many evangelical writers and leaders (N.T. Wright, John Howard Yoder, Rick Warren, and others) are now calling Christian believers to dialogue and political action on issues such as global warming and economic justice. Wallis posits some new rules of engagement for the faithful:

• God hates injustice.
• The kingdom of God is a new order.
• The church is an alternative community.
• The kingdom of God transforms the world by addressing the specifics of injustice.
• The church is the conscience of the state, holding it accountable for upholding justice and restraining its violence.
• Take a global perspective.
• Seek the common good.

The author charts how coalitions of politically conservative and progressive religious activists are forming around this ideal of the common good which is central to Catholic teaching, liberal Protestantism, the social revival tradition of evangelicalism, and the Jewish concepts of shalom and tikkun. Wallis likens this movement to the great social reform movements of the past that abolished slavery, established civil rights, extended voting rights, protected workers, and created a safety net for our most vulnerable citizens. He hopes it will summon the best in the American people and forge a new politics beyond the exclusive categories of liberalism and conservatism.

In successive chapters, the author spells out what can be done to address the pressing issues of global and domestic poverty, environment degradation and climate change, pandemic diseases, human rights, health care, war and peace. Along the way, he includes fascinating observations on "a culture of life," the new abolitionists, the death penalty, torture, and conflict resolution. In the closing chapters, Wallis identifies the big struggle of our times as the fundamental choice between cynicism and hope. He ponders the importance of moral leadership and addresses the next generation in a letter with asides on vocation, prayer, and humility. 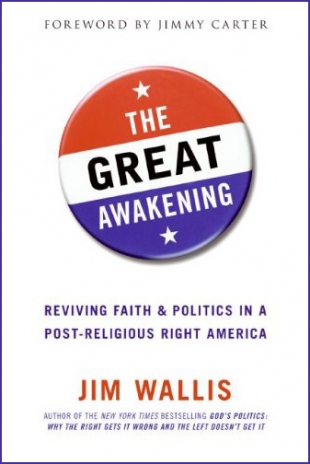