Seeking Peace Chronicles of the Worst Buddhist in the World

By Mary Pipher
The story of a bestselling author’s emotional meltdown at the height of her success and her spiritual breakthrough to a new way of living.

Mary Pipher is a psychologist and author of eight books including Another Country and Letters to a Young Therapist. In this candid and wide-ranging memoir, she takes a hard look at her life, focusing on how a meltdown in 2001 led to a spiritual breakthrough that set her on a new course. Pipher writes about her childhood in the 1950s and 60s in small towns. Her mother, a smart and controlled woman, was a doctor; her father, sometimes loving and other times violent, was a military man with Southern roots. While pursuing their own dreams, they often left the family behind. Pipher, the oldest, took care of her siblings and played what she called the "glad game" — always putting a positive spin on things and denying her own needs and desires. Attending the University of California at Berkeley, she felt guilty about leaving the family behind in the Midwest. On the way to medical school, she unexpectedly became pregnant and gave birth to her son Zeke, preparing to raise him as a single parent. She switched her major to psychology and met her future husband, Jim, on the first day of graduate school. They moved to Nebraska and had a daughter.

In the 1980s, Pipher began her career as a writer. She was totally unprepared for the success of Reviving Ophelia, a study of adolescent girls that was published in 1994. The book climbed up the bestseller list, and Pipher entered what she calls "a zone of constant pressure, scrutiny, and high stakes." The contented self she had known for 47 years disappeared and was replaced by one who was constantly on edge and exhausted. She notes:

"My story has been a Cinderella story. Almost overnight I went from scrubbing floors and peeling potatoes to dancing in the ballroom with the handsome prince. I was the luckiest girl in the world, but alas, I didn't have the temperament to be a princess. I didn't like dressing up or being the center of attention. I preferred the role of servant to that of the served. I was more content preparing the feast, darning the socks or sitting among the birds in the garden. I never felt I was meant to be Cinderella. As a scullery maid, I knew my place."

It will be difficult for many readers to identify with Pipher's emotional and spiritual crisis that came with success. It is the dream of every writer to have a bestseller, to be on Oprah, and to be invited to speak around the world. Pipher comes up with the phrase "avalanched by roses" to describe what happened to her. Roses, she notes, can smother just as much as mud or snow. She would agree with what screenwriter Shelby Foote once observed, "There is no more dangerous place on earth than right under the mouth of the horn of plenty." And with writer Malcolm Lowry: "Success may well be the worst possible thing that could happen to any serious author."

After an emotional meltdown in 2002, Pipher took some time off to deal with her depression and disorientation. She was attracted to Buddhism and the practice of meditation. What caught her attention was the idea of releasing feelings of guilt, fear, and perfectionism. The practice of mindfulness helped her calm her monkey mind and cope with her longtime problem of insomnia. Prayer replaced worry: now when she feels anxious she asks for relief to all who are in the same boat: "I pray for all other people who feel anxious and edgy at this moment."

Pipher tries mantras to help her embrace her own goodness. She surrenders her allegiance to the tyranny of "shoulds." By the time she reaches a 60th birthday celebration near the end of the book, the author is filled with joy, self-compassion, and a robust appreciation for her extended family. 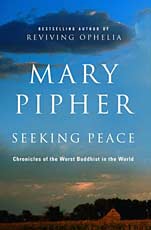