Voices of the First Day Awakening in the Aboriginal Dreamtime

By Robert Lawlor
A revelation of the rich legacy of the aboriginals for the human race.

"The Aborigines possess a sacred science, one that seeks to fuse the energies of the earth and humanity to those of the cosmos. The medium of that fusion is magnetism in both its physical and more subtle levels of expression; its tools are blood and other sensitive magnetic conductors in the pigments of the blood of the earth, plants, and animals. This science of attunement opens their consciousness to enable them to communicate with the memory and mind of Earth. Their instincts, intuitions, and presentiments are based on the ability to perceive and participate in the subtle energies and the subjective life of the entire natural world," writes Robert Lawlor, an author, translator, and international lecturer. This unusual book is illustrated with drawings, fine art reproductions and early photographs of the Aborginal People.

Lawlor explains that these people have grounded their culture in remembrance of "the first day" and a myth of creation which has lasted over 150,000 years. The Australian Aborigines are very cognizant of the presence of their "creative ancestors" and their contributions to their tradition. They have rejected many of the values the dominant culture cherishes such as agriculture, architecture, writing, clothing, and the subjugation of animals. Instead of money, the Aborigines cherish kinship, community, and the importance of the law of the Dreamtime. In fact, they people have no concept or word for time or the accumulation of possessions. Their elders maintain a vital physicality and participate in ceremonies and the rigors of hunting and gathering. No retirement communities here.

Lawlor does a good job explaining the Dreamtime and all its applications to aboriginal life and culture. He also explores the aboriginal understandings of the earth, the womb of the rainbow serpent, the rites of transition, the social face of love, totemism, wise women, and death. Voices of the First Day: Awakening in the Aboriginal Dreamtime by Robert Lawlor is a primary resource in understanding and appreciating the aboriginal path and its relevance to the twenty-first century. 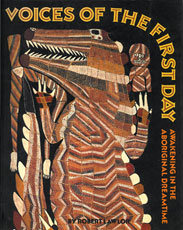