One River, Many Wells Wisdom Springing from Global Faiths

By Matthew Fox
A wide-ranging and substantive sourcebook on the spiritual wisdom of the world's religions.

Matthew Fox, now an Episcopal priest, is the author of 24 books and serves as president of the University of Creation Spirituality in Oakland, California. This wide-ranging and substantive sourcebook of the spiritual wisdom from the world's religions, contemporary scientists, and mystical seers is a powerful example of deep ecumenism — something the author has been pioneering for years. He quotes Father Bede Griffiths, a Benedictine monk who devoted his life to interfaith exploration, as saying that the time has come "to share one another's spiritual riches. . . . If one starts with doctrines, the arguments are endless. . . . But when one comes to the level of interior experience, that is where the meeting takes place. . . . It is in the cave of the heart that the meeting has to take place."

The book, which contains various scriptural texts of the religions and excerpts from ancient and modern mystics, is divided into four sections: relating to creation; relating to divinity; relating to ourselves: paths to encounter and enlightenment; and relating to the future: what the divine is asking of us. Fox believes that these thematic sections address some of the major concerns of our time — ones relevant "to our soul and social needs." Specifically, he identifies 18 themes characteristic of the universal religious tradition of humankind.

In the early pages, the author states that perhaps this resource could be seen as "a scripture for the twenty-first century." It emphasizes the common elements that link the faith traditions together. It celebrates the creativity that emanates from mixing the words of Sufis, Celtic authors, aboriginal peoples, African-Americans, and the mystical teachings of Christian and Goddess sources. Even given the wealth of material in this treasure trove of wisdom, One River, Many Wells is not meant to be the definitive sourcebook.

We were very pleased to see in the 18 themes an emphasis on four spiritual practices showcased in the Alphabet of Spiritual Literacy: beauty, compassion, imagination, and joy. Fox also does a fine job assessing the importance of delving into the many names of God, the feminine face of Divinity, and the nature of spiritual warriorhood (the pursuit of justice). He ends on a high and holy note with an exercise in "remythologizing our faith lives." He lists 18 myths that might just serve as the catalysts for reinvigorating our species in the twenty-first century. One of the most delicious is: "The myth that the Divine 'I Am' can be spoken by every one of us and by every creature and that this is our way of asserting our divine nobility and exuding a radiance greater than ourselves." 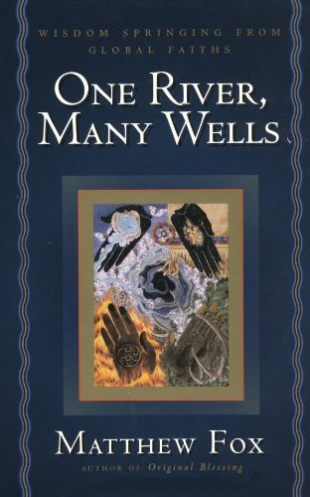