Life Abundant Rethinking Theology and Economy for a Planet in Peril

By Sallie McFague
A soul-stirring theological work that calls Christians to be justice in a world of gross inequities and rampant selfishness.

In this resplendent follow-up to Super, Natural Christians (1997), Sallie McFague, Carpenter Professor of Theology Emerita at Vanderbilt Divinity School in Nashville, has written a most timely and soul-stirring theological work. It is addressed to privileged twenty-first century North Americans who enjoy all the benefits of a high standard of living. McFague calls these readers to a rigorous path of discipleship. Her jubilant credo is summed up in this sentence: "We live to give God glory by loving the world and everything in it." Unpacking what this entails, she notes: "The Christian way inevitably leads to an understanding of salvation as deification, becoming like God. Made in God's image, we are to grow into that reality by doing what God does: love the world."

Under this rubric, sin means living a selfish life. Christian discipleship involves doing everything humanly possible to help others and the planet flourish. This brand of love is not easy or fashionable. In the words of Latin American liberation theologian Gustavo Gutierrez, "When one is concerned about one's own stomach, it's materialism, but when one is concerned about other people's stomachs it is spirituality."

In place of the reigning economic worldview or corporate model that leads to the destruction of the environment and the widening gap between the haves and the have-nots, McFague posits the community or organismic model that provides a context for the health and well-being of all. According to the author, we must all abide by three rules as members of the planetary household: take only your own share, clean up after yourself, and keep the place in good repair for future generations. Jesus as a pioneering householder demonstrated a different way of being in the world with his inclusiveness and egalitarianism.

In addition to her emphasis upon deification, McFague looks at the exemplary discipleship of Dorothy Day, the Catholic activist, and John Woolman, an eighteenth century Quaker abolitionist. They are walking parables of a countercultural approach to life that emphasizes frugality, simplicity, openness to others, and empathy.

McFague believes that Christian churches who are not beholden to the establishment have a grand mission — to demonstrate "cruciform living, an alternative notion of the abundant life which will involved a philosophy of enoughness, limitations on energy use, and sacrifice for the sake of others." Right now in this time and place believers have the unique opportunity to be justice for the sake of the planet and all its beings. 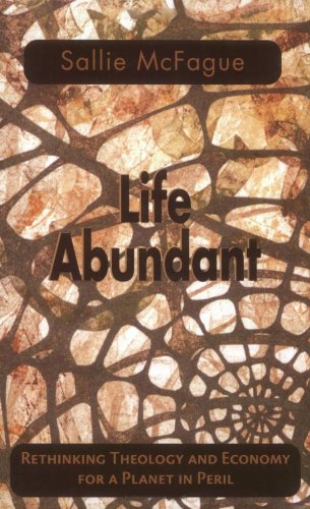