One of the things we love about Sufism, besides the poetry of Rumi and the spiritual practice of adab, are the teaching stories of Mulla, the folklore trickster of the Muslim tradition. We can think of no better spiritual teacher than Imam Jamal Rahman to introduce us to him and to share many of these humorous tales with us. He is co-founder and Muslim Sufi minister at Interfaith Community Sanctuary and an adjunct faculty member at Seattle University. His own books include Spiritual Gems of Islam and The Fragrance of Faith. As one of the Interfaith Amigos, he is a co-author of Getting to The Heart of Interfaith and Religion Gone Astray. You can find out more about him in his profile in the Living Spiritual Teachers Project.

Rahman explains this classic figure of the Sufi tradition:

"The Mulla is a village idiot and sage rolled into one. Although he has no formal education, he wears a turban, signaling that he is a person of learning. His wisdom appears to emanate from a source beyond book learning. The most popular image of the Mulla is the picture of him riding backward on his donkey, sometimes followed by adoring students. In this picture, many metaphors abound. The Mulla has tamed his donkey ego — it knows in which direction to go. The Mulla does not believe in hierarchy and faults religious institutions and clerics for their rigidity and lust for glory and power. Rather than turn his back on students, he prefers to face them. Most of all, he is happy to break conventional patterns of thinking and being. The Mulla does not care what you think of him; he does not seek your approval. Without a reputation or image to uphold, he laughs at his foibles and invites you to join him. He has a rare readiness to admit his mistakes. Because he does not aspire to be a teacher, he is a true teacher.

Part of the freedom that characterizes the actions and explorations of this trickster comes from the fact that he is not beholden to perfection. The Mulla admits his flaws, errors, misunderstandings, and inconsistencies, and laughs them away! Best of all, this trickster is a clever diagnostician of pride and the yearning for glory:

"And then there is the story about a man who was eager to receive the kind of adulation he has seen people lavish on Sufi masters. He sought out the Mulla and inquired about the length of the course to become a teacher. 'Ten years,' replied the Mulla. What if he studied twice as hard?' Twenty years, said the Mulla. What if he studied three times as hard? Thirty years, came the reply. How can that be? asked the confused aspirant. 'When one eye is fixated on fame and glory,' said the Mulla, 'there is only one eye left to find your way.' Truly, the path of spirituality requires our full attention, along with patience, humility, sincerity, presence, and pure intentions."

• Our Human Condition
• Some Shifts in Awareness
• Foibles and Vulnerabilities
• Wariness of Religious Institutions
• Spiritual Practices
• Wisdom for the Inner Journey
• Knowing God
• Be Engaged in the World
• Time to Return Home.

Each chapter contains stories along with reflections, quotations, and practices. Again and again, the Mulla proves the truth of Rabindranath Tagore's observation: "The burden of self is lightened when I laugh at myself." And the ego is tamed when we try this spiritual practice:

"When you praise someone, make sure it comes from a place of sincerity in you. Silently, offer a prayer for the person you are praising. May divinity make that beautiful attribute thrive in the person's being."

Rahman points out that even in times of suffering, pain and loss, Sufis are grateful and this is expressed in one of their sayings: "Beneath every ruin is a treasure." Every event can hold the power to open our hearts even wider:

"One day the Mulla discovered that his donkey — his helper, companion, and source of livelihood — had disappeared. The entire village searched far and wide, but to no avail. The donkey was simply gone. In the evening, the villagers found the Mulla on his knees in the town square, raising his hands toward Heaven and exclaiming, 'Thank you Allah! Thank you, Allah!' 'Mulla,' they asked, 'don't you realize that your donkey is lost forever? ' 'I, I know, I know,' replied the Mulla. 'But I have so much to be grateful for. Imagine what could have happened to me if I had been on the donkey!' "

The Qur'an says: "Everywhere you turn is the face of Allah." Rahman includes a teaching story to speak to this text:

We are rejoicing with the release of this awesome collection of teaching stories from the Sufi tradition. Rahman proves himself to be a superb guide and substantive commentator on the spiritual meanings of these wisdom teachings. 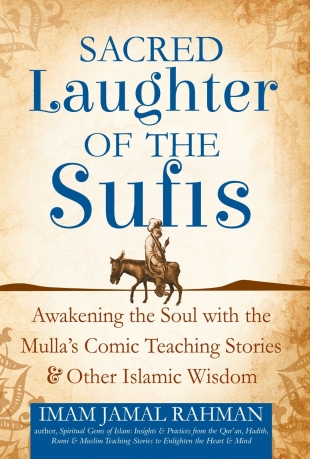