One-Liners A Mini-Manual for a Spiritual Life

By Ram Dass
A jump-start for your devotional reading with its spunky insights.

In his brief introduction to this volume, Ram Dass says: "This book is a kind of spiritual brandy, a distillation of the lectures I 've given over the course of the past decade or so. . . . The quotes are the little 'aha! ' moments, the cameos that have been served up out of our collective consciousness from time to time that seem to summarize something about our human journey."

The themes here are reflective of the diverse and eclectic roads that Ram Dass has taken over the past 30 years with psychedelics, meditation, guru devotion, service of others, consciousness raising, reflections on conscious aging, and confronting death. The more than 200 one-liners gathered together in this book are indeed a mini-manual for a spiritual life. They challenge us to do inner work and to engage in compassionate action on behalf of others.

Ram Dass makes some cogent observations on the tricky deceptions of the mind and the warps of the Ego. For instance: "The heart surrenders everything to the moment. The mind judges and holds back." He believes that difficulties usually have something to teach us. Or as he puts it with this imaginative metaphor: "Suffering is the sandpaper of our incarnation. It does its work of shaping us." There is always more inner work to be done. One clue is the following: "A feeling of aversion or attachment toward something is your clue that there's work to be done." Equanimity is a spiritual virtue that leads to wisdom, but it takes plenty of practice. We were especially perked up by the following one-liner: "To materialist eyes, India is a developing country; to spiritual eyes, the United States is a developing country."

Savor these gems. They are an ample testament to Ram Dass's wisdom gleaned from regular practice and study over the long stretch of time. 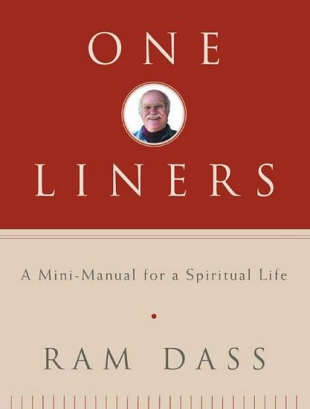