By Gary Thorp
An exceptional work of spiritual literacy that shows the marvels that can be found through questing.

Last year, we gave a Spirituality & Health Book Award to Gary Thorp for the spiritual literacy he demonstrated in Sweeping Changes: Discovering the Joy of Zen in Everyday Tasks. He has studied Zen since 1960 and has honed his writing skills to a fine art. There is a suppleness to his prose that brings to mind the elegant writing of Terry Tempest Williams, Barry Lopez, and Rick Bass. The comparison with these writers is especially apt since they all have written about mountain lions as well. This lyrical and awesome work recounts Thorp's three-year quest to see one of these creatures in the hills and mountains around his home in Marin County, California. Using the traditional form of Japanese writing known as nikki bungaku (literary diary), Thorp records his adventures which include studying a mountain lion in the zoo, attending a animal tracking course, pondering insights of other nature writers, and walking in the wilderness at night.

While thinking about Peter Matthiessen's quest in 1973 to see a snow leopard in Nepal, the author notes: "For some people, he realized, it was a remarkable experience to see a rare animal, such as a great cat, in its wild environment. For others, it was wonderful not to see it. Some of us admire the skill of a creature in traveling unseen and in living among human residents undetected. That is what Matthiessen comprehended; that the search itself was often the most instructive and valuable part of the experience; that this kind of endeavor pitted camouflage and stealth against vision and determination; and it honed the skills and perceptions of both the pursuer and the prey. . . . To follow something skillfully and with diligence is certainly one of life's great arts. To trace a fragrance, a fragile thread of evidence, an indistinct path, or a new kind of reasoning to a definitive end can be the beginning of a true journey."

Thorp's study of Zen helped him come to terms with his natural frustration and impatience in not seeing a mountain lion. After all, to go galloping after an outcome is nothing but sheer folly. And so he stays with the journey, gathering impressions, and tiny epiphanies along the way. Mountain lions love to avoid detection. They blend in with their surroundings and are masters at legerdemain, says the author. Thorp does see a bobcat, and as he peers at him, he sees in his face a mixture of "friendship, contempt, bewilderment, disinterest, understanding and merry amusement all at once."

Thorp respects the incredible mystery of these wild animals who defy human logic and all expectations about what they will do. During his three-year quest, the author becomes a much more attentive person: "To engage in a more 'active' kind of looking can be transformative. Regular walking becomes addictive and can lead to something very near spiritual discovery. Our legs and eyes become synchronized in easy rhythm. We begin to notice the minutiae that would probably have escaped us and gone unappreciated. We take delight in finding irregularities, oddments, bits of color out of place. Today, I have become so absorbed in looking that finding hardly matters." This is a book to savor and reread as a tantalizing account of the spiritual art of questing. 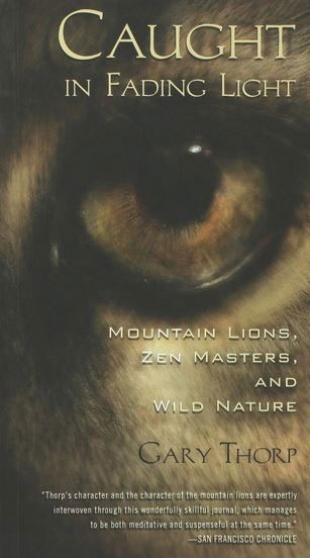