War Is a Force That Gives Us Meaning

By Chris Hedges
Delineates the mythology, the intoxication, and the multiple toxins of war in our time.

Chris Hedges has been a foreign correspondent for the past 15 years, most recently for The New York Times. He has covered insurgencies in El Salvador, Guatamala, Nicaragua, Colombia, and Gaza, the civil war in Sudan and Yemen, the fall of the Romanian dictator Nicolae Ceausescu, the Gulf War, the Kurdish rebellion in southeast Turkey and northern Iraq, and the war in Bosnia. He admits to experiencing war as a adrenaline-pumping adventure: "The rush of battle is a potent and often lethal addiction, for war is a drug, one I ingested for years. It is peddled by mythmakers-historians, war correspondents, filmmakers, novelists, and the state — all of whom endow it with qualities it often does possess: excitement, exoticism, power, chances to rise above our small stations in life, and a bizarre and fantastic universe that has a grotesque and dark beauty. It dominates culture, distorts memory, corrupts language, and infects everything around it, even humor, which becomes preoccupied with the grim perversities of smut and death. Fundamental questions about the meaning, or meaninglessness, of our place on the planet are laid bare when we watch those around us sink to the lowest depths. War exposes the capacity for evil that lurks not far below the surface within all of us."

War sometimes does have its exhilarations for soldiers in combat who experience a feeling of oneness with those by their side. But most of the time war is brutal, ugly, and terrible. The mythology surrounding it always speaks of glory, heroism, and self-sacrifice but Hedges reports the reality of war with its barbarity and unrelenting savagery. The author quotes a chilling statistic just to set things in perspective: In the wars of the twentieth century not less than 52 million civilians have perished, nearly 20 million more than the 43 million military personnel killed.

Throughout this gripping meditation on the insanity of war, Hedges presents material on ethnic conflicts and insurgencies. He says: "They are manufactured wars, born out of the collapse of civil societies, perpetrated by fear, greed, and paranoia, and they are run by gangsters, who rise up from the bottom of their own societies and terrorize all, including those they purport to protect.

With great force and clarity, Hedges delineates the us-verses-them mythology, the corruption of language, and the flag-waving patriotism that are part and parcel of a nation preparing for war. He laments that some of the humility that America experienced after the defeat in Vietnam, especially in the acknowledgement of its own capacity for evil, has vanished. Millions of citizens are convinced that war with Iraq will be as easy as the Gulf War, given the superiority of U.S. firepower and knowhow. Generations raised on computer games and war movies are convinced of their invincibility. Hedges wonders whether those in power have a death wish: "If the humility we gained from our defeat in Vietnam is not the engine that drives our response to future terrorist strikes, even those that are cataclysmic, we are lost. The only antidote to ward off self-destruction and the indiscriminate use of force is humility and, ultimately, compassion. Reinhold Niebuhr aptly reminded us that we must all act and then ask for forgiveness. This book is not a call for inaction. It is a call for repentance."

War Is a Force That Gives Us Meaning by Chris Hedges is a timely volume that speaks to the most important issue of our time. 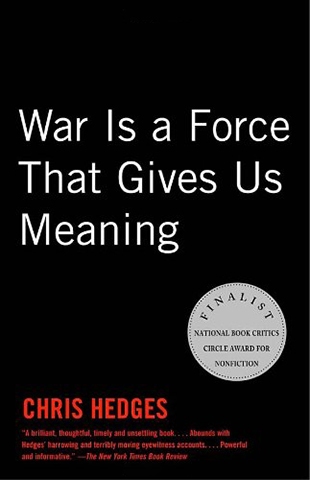