Quaker minister, preacher, and missionary William Penn was imprisoned many times for his faith in the late seventeenth century in America. This gave him plenty of time for silence and meditation. He wrote: "I thank God for my opportunities for solitude, and kiss the gentle hand that led me into it. Though solitude might seem barren to the world, it can never be so to me."

In this lively and pensive collection of quotations, Eric K. Taylor has updated Penn's language and created gender neutral expressions. Many of the moral concerns revolve around this Quaker leader's "Holy Experiment" in Pennsylvania, a place he hoped would be a refuge for persecuted believers. Taylor nicely sums up the legacy of this extraordinary man: "He had the integrity and courage to follow his conscience, even at great personal cost. He suffered without becoming bitter. He held great power without being corrupted by it. He was a great thinker, but he had the humility and the wisdom to seek and value the input of others. In an intolerant age, he granted toleration to others while staying true to what he believed. In an age where Native Americans were often cheated, Penn treated them with dignity, honesty, and equality; he stands virtually alone in having kept and upheld the treaties he made with them. Penn showed by his life that a man of peace could live well in a violent world."

We were very impressed with the range and depth of Penn's sage commentary on the importance of guarding the tongue. "If you think twice before you speak once, you will speak twice as well." This Quaker was realistic about human nature: "We are more prone to complain than to restore, more prone to judge than pardon." An essential element in good conduct is refraining from constantly putting others down: "Nothing better shows the folly — and the sneaky deceitfulness — of our hearts, than our reducing the merit and reputation of others." The right path is the little traveled path: "Just and noble minds rejoice in other's successes and help add to their praise."

As a Quaker, Penn believed in quieting the mind. This regular practice helps combat unhealthy emotions: "Suspicion is a kind of civil war in the soul, where sound judgment and imagination are perpetually at odds." Penn has many other wise sayings about justice, force, patience, contentment, friendship, balance, respect, generosity and much more. Taylor has grouped his words by subject, making this a very valuable resource for writers, speakers, and preachers. 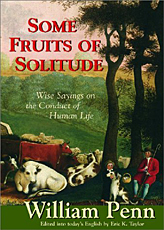