The Deeper Dimension of Yoga Theory and Practice

By Georg Feuerstein
Demonstrates in 78 essays the richness of this spiritual tradition.

"Yoga has had a glorious history and offers a sophisticated understanding of the human mind, profound moral and philosophical teachings, and a great many practices apart from the postures," writes George Feuerstein, the founder-director of the Yoga Research and Education Center in California and the author of more than thirty books including Yoga Gems and Tantra: The Path of Ecstasy. Of course, many of the 30 to 40 million people around the world who practice yoga regard it mainly as physical fitness training. Feuerstein focuses on its riches as a spiritual discipline. This superb volume draws together 78 of his essays divided into chapters on orientation, approaching practice, moral foundations, the spectrum of yoga practice, and higher stages of practice. "If we genuinely desire to know ourselves more profoundly and make sense of the world in which we live, Yoga is a reliable, well-tested vehicle." It has been practiced on the Indian subcontinent for 5,000 years and has developed within Hinduism, Jainism, and branches of Buddhism.

Feuerstein spins out the many splendors of what B.K.S. Iyengar has called "an art, a science, and a philosophy." The author writes persuasively and succinctly about the devotional bounties of Bhakti-Yoga, styles of Hatha-Yoga, spiritual friendship, understanding the guru, the art of purification, the practice of mauna, nonharming according to Jaina Yoga, ethical guidelines for Yoga teachers, asanas for the body and the mind, the breath of life, mudras as gestures of wholeness, the sacred syllable Om, prayer in yoga, emptiness, liberation, and much much more.

In an essay entitled "Yoga Begins and Ends With Virtuous Action," Feuerstein writes: "Virtue is for most Westerners an old-fashioned word and an equally antiquated and impractical concept. In the spiritual traditions, however, virtue is considered a foremost principle of action. While, in Yoga, the ultimate Reality is thought to lie beyond good and evil, there is a recognized need for the cultivation of virtuous deeds, words, and thoughts. Virtue is traditionally connected with the idea of merit. ...which is really the fruit of good karma, that is, the positive momentum generated in the mind as a result of positive physical, verbal, or mental behavior. Positive behavior is associated with kindness, compassion, love, nonharming, generosity, patience, contentment, correct understanding, etc. It leaves imprints of a positive nature in the depth of the mind." This path of liberation, according to the author, goes through rather than around morality. Putting the welfare and happiness of others first is a virtue well worth retrieving in these tense times. George Feuerstein ably demonstrates the depth and profundity of Yoga as a spiritual discipline. 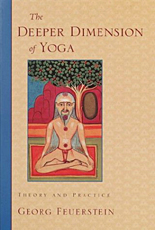