When Lawrence Kushner, the author of more than a dozen books on Jewish spirituality and mysticism, was rabbi at a synagogue in Sudbury, Massachusetts, he taught an introductory course on the Hebrew of the Hebrew Bible. Playwright, essayist, and novelist David Mamet was part of this study program and later continued to discuss biblical texts with Kushner. The result is an engrossing examination of passages from Genesis, Exodus, Leviticus, Numbers, and Deuteronomy. In a preview of what is to come, these two creative Jews observe:

"Imagine, for instance, that you are a therapist. To your trained ear, anything said by your patient has many potential nuanced shades, associations, and levels of possible interpretation. Now imagine that your patient is God. Surely the words of the Source of All Words must be infinitely meaningful. In the language of the Zohar, the master text of Jewish mysticism, 'The stories in the bible couldn't be about what they seem to be about, otherwise we could write better stories!' The holiness of sacred text, in other words, comes precisely from its ability to continuously generate new interpretations."

Kushner and Mamet do not disappoint with their thought-provoking and soul-stretching interpretations of the names of God, anti-Semitism, the repudiation of infant sacrifice, Joseph and his brothers, Moses, capital punishment, Judaism's struggle and much more. We like Mamet's comments on the Noah's egotism: "Hasidic tradition disdainfully calls Noah a tzaddik im petz, a righteous man in a fur coat, who, instead of helping others build a fire to warm themselves, just pulls his own coat tighter around himself."

And here's Kushner on one of the main emphases of Judaism: "Holiness is being aware that you are in the presence of God. That something else is happening, something numinous, transcendent, other. Something that partakes of life and death, good and evil (remember the two trees in the Garden of Eden). An object, a place, a time, a person is holy because it evokes the presence of God. We cover our heads, remove our shoes, look away in reverence. Unlike some spiritual traditions that see the world divided ontologically and irretrievably into sacred and profane, here we are told that, by our actions, we can realize the holiness in everything." 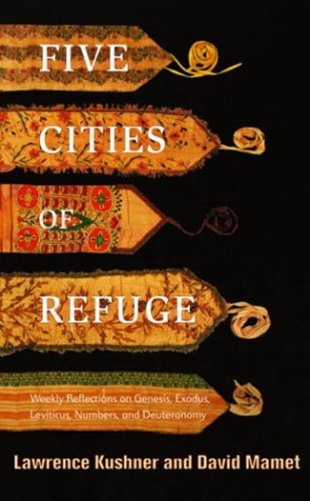