The Soul of Politics Beyond "Religious Right" and "Secular Left"

Jim Wallis, the founding editor of Sojourners magazine, believes that America is in the midst of a terrible crisis where "our most basic virtues of civility, responsibility, justice, and integrity seem to be collapsing." Liberal and conservative politicians are so busy bashing each other that they have not put forward positive visions or programs to combat the social, economic, and political problems which confront us.

In The Soul of Politics Wallis writes about a new movement linking spirituality and politics. It emphasizes personal responsibility, social compassion, and economic justice. This nonsectarian and pluralistic movement has its roots in the prophetic biblical tradition. Wallis is convinced that this ethically-based activism lies behind religious efforts to end nuclear war, to provide sanctuary for Central American refugees, and to build new houses for the homeless.

Agreeing with Gandhi's view that "poverty is the worst form of violence," the author finds signs of spiritual transformation and social renewal among inner city residents of his hometown, Washington, D.C.; in the black townships of South Africa; and in the rural barrios of Central American and the Philippines.

With hard-hitting realism, Wallis challenges readers to attack the evils and injustices of sexism, consumerism, and racism, which he calls America's original sin. Overconsumption, in his view, has made politics into a spectator sport and emptied life of meaning for millions of addicted shoppers. As a result, this malaise lies behind both the alienation of the affluent and the self-destruction of the poor.

Wallis sees the soul of politics in a gang truce movement growing out of a summit meeting in Kansas City in 1993 after the Los Angeles riots. He also celebrates the rainbow coalition of citizens working for democracy in the new South Africa. "Between impossibility and possibility, there is a door, the door of hope," writes Jim Wallis. Those seeking environmental justice, racial reconciliation, gender equality, and economic innovation have walked through this door of hope. The Soul of Politics beckons readers to join these pioneers whose practical and prophetic vision of change is the way to a better world. 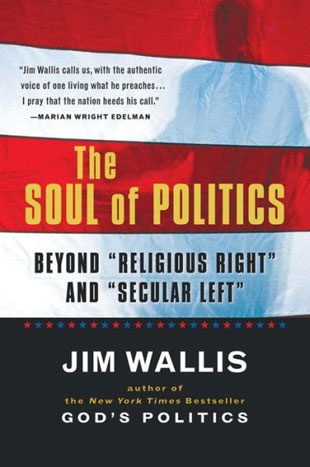