The Wave in the Mind Talks and Essays on the Writer, the Reader, and the Imagination

By Ursula K. Le Guin
Fine insights and tributes to the power of creativity and the imagination.

Ursula Le Guin is a masterful storyteller who has written many short stories and more than 15 novels. In this scintillating collection of talks and essays, she pledges her allegiance to imagination. At one point, she calls it "the single most useful tool humankind possesses." She is equally high on the reader, who is a real hero in her eyes: "Reading is not as passive as hearing or viewing. It's an act: you do it. You read at your own pace, your own speed, not the ceaseless, incoherent, gabbling, shouting rush of the media. You take in what you can and want to take in, not what they shove at you so fast and hard and loud that you're overwhelmed. Reading a story, you may be told something, but you're not being sold anything. And though you're usually alone when you read, you are in communion with another mind. You aren't being brainwashed or co-opted or used; you've joined in an act of the imagination."

This paperback is divided into sections on personal matters, readings, discussions and opinions, and writing. Le Guin shares many of her loves as she ponders the works of J.R.R. Tolkien, Mark Twain, and J. L. Borges and expresses her admiration for the feet of dancers, rhythm, science fiction, libraries and beauty. In one of the best pieces, Le Guin explains why reading a book will never be replaced by any kind of viewing:

"A reader makes the book, brings it into meaning, by translating arbitrary symbols, printed letters, into an inward, private reality. Reading is an act, a creative one. Viewing is relatively passive. A viewer watching a film does not make the film. To watch a film is to be taken into it — to participate in it — to be part of it. Absorbed by it. Readers eat books. Film eats viewers.

"This can be wonderful. It's wonderful to be eaten by a good movie, to let your eyes and ears take your mind into a reality you could otherwise never know. However, passivity means vulnerability; and that's what a great deal of media storytelling exploits."

This is the kind of cogent and creative thinking that makes Le Guin such a fine read. 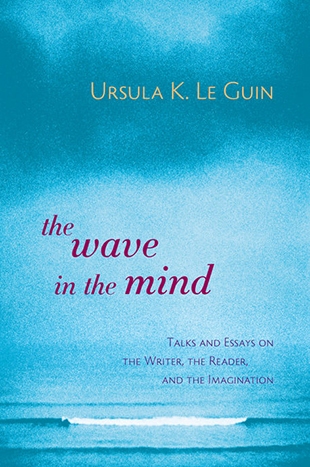