The Olympic Odyssey Rekindling the True Spirit of the Great Games

By Phil Cousineau
The Olympic Odyssey: Rekindling the True Spirit of the Great Games by Phil Cousineau offers a spiritually edifying overview of this epic pageant and its meaning in our lives and times.

Baron Pierre de Coubertin (1863 - 1937), a French nobleman, believed that sports and the ideals of the Olympic Games produced the flowering of Greece during "The Golden Age." Almost singlehandedly, he revived the spirit of the ancient Games to foster brotherhood and friendly competition among athletes of the world. His philosophy, stated in 1903, has been displayed on electronic scoreboards at the opening ceremonies of the Games: "The most important thing in the Olympic Games is not to win but to take part, just as the most important thing in life is not the triumph but the struggle. The essential thing is not to have conquered but to have fought well."

In The Olympic Odyssey, Renaissance man (author, editor, teacher, adventure travel leader, photographer, and documentary filmmaker) Phil Cousineau starts out with a stirring quotation that matches the Frenchman's to get our attention focused on what really matters in the Games:

"It is in fact the miraculous force that animates all great art as well as great athletes. Call it spirit, the divine spark, the breath of life — it is the transcendent element that lifts us up when we're down and out, the source of courage, and the soul of inspiration. Strangely, we're not quite sure where it comes from, where it goes when it's crushed, or how to revive it. We just know we need to be in touch with it, which is one reason we turn to art, drama, poetry and sports, especially the Olympic Games, the most watched television event on earth. As the Games unfold every four years, we may be impressed by the skills of the world's greatest young athletes; but what moves us is what novelist and soccer fan Nick Hornsby calls 'the thrilling flash of their spirit.' That mysterious movement of spirit — from an athlete's aspiration for a great performance to our inspiration from witnessing it — is at the heart of the age-old fascination with all great games."

In this comprehensive and informative paperback, Cousineau examines the mythic and historical genesis of the Games and the intentions behind these ancient gatherings. He ponders the meaning of excellence, the roots of "the agony and the ecstasy," and the celebration of the contest. He lays out the challenges to revive the Games and the passing of the torch from 1896 to 1980. And then, with great flourish, Cousineau comments on the fiery pursuit of excellence from 1980 to 2000 with colorful anecdotes and asides on many of the athletes who hit high stride in their performances. He uses a quotation from the wall of an old Philadelphia sports arena to sum up:

This is not an easy goal in an age where winning is seen as so important that people are urged to do anything to gain an edge on their opponents, even cheating. It is not easy in a time when commercial interests have taken the joy out of so many games. After a chapter on coaching, Cousineau concludes with his own Olympian Vision for the future, and it is well worth the price of the whole book. As you watch the Games, we urge you to ponder it and take to heart (see the excerpt). He ends on a note that is as salutary as the one he began with on the spirit of sports:

"The Olympic Games teach us that life can be a festival, that competitions can enliven the entire community, that the desire to excel makes winners of us all, and that playing at the meaning of life is a noble thing. To convey the spirit of the ancient Games and the soul of the modern Games to the next generation is now our hope; to pass the torch of our passion for a life of excellence is now our task." 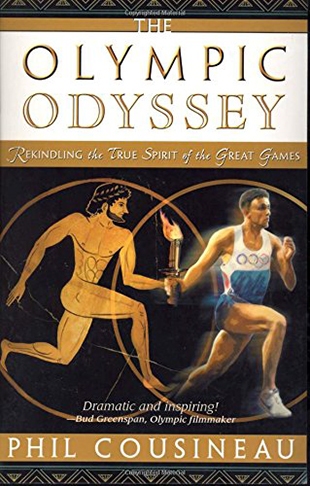