By Jonathan Sacks
Makes a good case for the spiritual practice of hospitality in a world of global religious and economic strife.

Jonathan Sacks has been Chief Rabbi of the United Hebrew Congregations of the Commonwealth since September 1991. He is the author of a number of books including Celebrating Life: Finding Happiness in Unexpected Places. This paperback, winner of the Grawemeyer Award, offers a faith-based overview and evaluation of globalization and an inspiring declaration of what Judaism has to offer the twenty-first century world. Best of all, Sacks makes a good case for the spiritual practice of hospitality — respecting the rights of strangers and honoring the distinctive contributions of all religions to the wisdom fund of humanity. The chapter titles give a picture of the thematic sweep of this impressive work: Control: The Imperative of Responsibility; Contribution: The Moral Case for the Market Economy; Compassion: The Idea of Tzedukah; Creativity: the Imperative of Education; Co-operation: Civil Society and its Institutions; Conservation: Environmental Sustainability; Conciliation: The Power of a Word to Change the World; and A Covenant of Hope.

"Judaism was the first religion to wrestle with the reality of global dispersion," he writes. "That experience forced Jews to reflect on many problems that are now the shared experience of mankind: how to maintain identity as a minority, how to cope with insecurity, and how to sustain human dignity in a world that seems often to deny it. Judaism eventually gave rise to two other monotheisms, Christianity and Islam, that represent the faith of more than half of the six billion people alive today. There is much in common in the ethics of these three faiths, though each speaks in its own distinctive accent." Sacks states that Judaism never claimed to be the one true religion; in fact, God created all human beings in his image but also gave them special talents and gifts. The unity of the Creator is a love and a celebration of diversity.

Sacks carries this exploration further in an incisive discussion of the necessity in our global world to respect differences — especially those of strangers. Check out this sober-minded overview:

"Nowhere is the singularity of biblical ethics more evident than in its treatment of the issue that has proved to be the most difficult in the history of human interaction, namely the problem of the stranger, the one who is not like us. Most societies at most times have been suspicious of, and aggressive toward, strangers. This is understandable, even natural. Strangers are non-kin. They come from beyond the tribe. They stand outside the network of reciprocity that creates and sustains communities. That is what makes the Mosaic books unusual in the history of moral thought. As the rabbis noted, the Hebrew Bible in one verse commands, 'You shall love your neighbor as yourself,' but in no fewer than 36 places commands to 'love the stranger.' "

Here is a model for all religions to take to heart in this age of terrorism where any outsider is looked upon with fear.

Sacks comments on some of the warps inherent in global capitalism where the wealth of the few has been emphasized over the vast poverty of the many. Inequity has been magnified and not diminished by the emphasis in the West on the profit making engines of the corporation. Life, Judaism points out, is much more than a series of market exchanges: "The great faiths teach a different kind of wisdom: reverence in the face of creation, responsibility to future generations; and restraint in the knowledge that not everything we can do, should we do." This is a profound work of cultural and spiritual perspicacity. 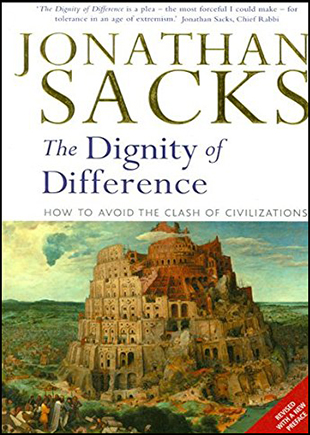