By Aura Glaser
Shows how this spiritual practice is integral to psychological health and wholeness.

Aura Glaser has had a private practice as a psychotherapist since 1991. In 1979, she traveled to India. During the two years she lived there, she met and studied with some of Tibet's greatest living masters. She is one of the foremost students of Tibetan Buddhist master Gehlek Rimpoche. She has taught Tibetan Buddhism since 1986 and is co-founder of Jewel Heart, an international Buddhist organization. In his foreword, Robert Thurman salutes her work in making compassion a subject considered worthy of pursuit in Western psychology. As a spiritual practice, it lends itself to everyday use in a variety of settings and situations.

A major problem facing individuals in society today is the mind set that separates us from others. Equally harmful is the practice of judgment which sets one up as right and the other as wrong. Compassion addresses both of these warps. It grows out of empathetic awareness and sets out to help others be free from suffering.

Glaser discusses the language of compassion and the compassionate revolution of Tibetan Buddhism. She then looks at Sigmund Freud's assessments of desire and Carl Jung's exploration of the courage to be oneself as entryways into what she calls "the way of transformation." The remedy for combating separation and judgment is the Tibetan Buddhist practice of lojong, found in the Seven Points of Mind Training. Glaser concludes with an elucidation, the "Alchemy of the Heart," which is essentially having compassion for self, those close to us, and those who are strangers.

In Ethics for the New Millennium, the Dalai Lama said, "Compassion and love are not mere luxuries. As the source of both inner and external peace, they are fundamental to the continual survival of our species." That is why it is imperative that those working in the field of psychology give more attention to the cultivation of this important spiritual practice. 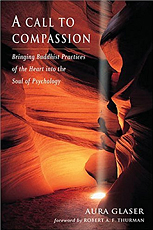