G. I Gurdjieff (1866-1949) was an enigmatic, Armenian-born spiritual teacher whose one-of-a-kind spiritual teaching has been a quiet force in Western spiritual history for nearly 100 years. Spirituality & Practice is pleased to offer you a rare opportunity: a practical, hands-on exploration of Gurdjieff's powerful spiritual practices minus the intellectual speculation and secrecy! This 12-part email course created by renowned teacher Cynthia Bourgeault plunges you right into the heart of these transformative practices.

"The Work," as it's familiarly known, was Gurdjieff's colossal attempt to recover ancient spiritual wisdom in danger of total eclipse in the West and to pass it on in forms accessible to contemporary men and women without the intermediaries of religion, dogma, or fanaticism. Since Gurdjieff's first arrival in St. Petersburg, Russia, on the eve of World War I, the Work was displaced westward and organized itself in "below the radar screen" study groups in Europe and North and South America. Its influence has been largely felt through the stature and influence of some of its major proponents, including philosopher Jacob Needleman, playwright/director Peter Brook, and P. L. Travers of "Mary Poppins" fame.

In overall format you could describe the Work as an early type of mindfulness training, but with distinctly Western heart and soul and a flavor all its own! Its core program is designed to bring out of the distracted, self-important, self-preoccupied contemporary personality a conscious human being, capable of presence, freedom, and compassionate action.

While many of the practices are familiar along the path of spiritual transformation, Gurdjieff brings them a flavor all his own. And some of the specialities, such as the Work's teaching on attention, identification, and self-remembering, are unparalleled in any other spiritual lineage.

In this e-course, Cynthia Bourgeault will lead you through the practices themselves in a cumulative, sequential way that remains concrete and focused on a practical task. She explores what Gurdjieff means by "conscious labor and intentional suffering" and hints at the huge cosmic vision underlying and tying together all these individual practices. She explains looks at where his ideas come from, but much more closely at where they're going, and how these simple but powerful practices can put teeth on the bones of your present spiritual commitment, whether it's officially "religious" or not.

Cynthia Bourgeault is one of the foremost contemporary bridgebuilders between the Gurdjieff Work and the contemporary spiritual sensibility. An Episcopal priest and retreat leader, she participated actively in the Gurdjieff Work for ten years and still remains deeply involved in its teaching and articulation. Like Gurdjieff himself, she discovered that these practices opened the door to deepening and grounding her own Christian practice, and she has been committed to extending the interfaces through workshops, writing, and now this e-course.

Join us for this unprecedented online course. You will receive:

• 12 emails from Cynthia Bourgeault
• access to the recording of a one-hour teleconference with Cynthia held when this course was first offered. 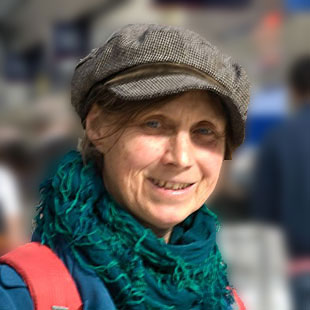