Evan Pritchard, a descendant of the Mi'kmaq people (part of the Algonquin nation), is the founder of The Center for Algonquin Culture. He is Professor of Native American history at Marist College in Poughkeepsie, New York, where he also teaches ethics and philosophy.

Named Abachbahamedtch (or chipmunk) by Micmac people, he is assistant to several Algonquin elders. Since 1990, his work bringing the Algonquin message to the media has helped thousands of people gain a better understanding of this great civilization and its teachings. He lectures frequently around the United States, sharing storytelling, traditional and contemporary songs, and bi-lingual poetry. He was the organizer of the North American Friendship Circle gathering on Columbus Day, 1992. He is also the founder of the Red Willow Society, Resonance Communications, and Roads To Awareness Seminars.

Pritchard has given "Native New Yorker" walking tours of lower Manhattan for the Smithsonian Institute, The Open Center, South Street Seaport, and other institutions. 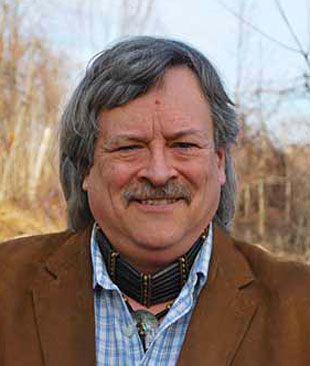