On ​December 9, 2021, the Otherworld welcomed Elder Malidoma Patrice Some home. After his passing, his friend and colleague ​​Elder Theresa Sykes Brittany recalled something he often said in his intensives — "We go forward we die, we go backwards we die . . . we might as well go forward." — while, she noted, he stressed "the importance of living in the full embodiment of our gift. Living full-on and wide open as the truest of our nature with the medicine that we came here to deliver." She continued: "Through his life as a living example and through ritual and indigenous spirit technologies, he offered us all an alternative way to treat one another; the opportunity to remember that which is already within our bones . . . that which unites us all."

Elder Malidoma was born in Upper Volta (now Burkina Faso), West Africa. Initiated in the ancestral traditions of his tribe, he was a medicine man and diviner. He held three master’s degrees, as well as Ph.D.s from the Sorbonne and Brandeis. For three years he taught literature at the University of Michigan.

Some's mission to form a spiritual connection between African and Western spiritual traditions began after he was kidnapped from his tribe at the age of four, only to escape and return to his tribe when he was twenty to learn its language and spiritual traditions. The experience shaped his approach to intercultural dialogue, especially in his effort to respond to such events with reconciliation rather than increased hostility.

A popular speaker at men’s movement meetings across the country, he discussed tribal customs and daily life, spiritual beliefs, the world of the ancestors, and the life-giving process of initiation. 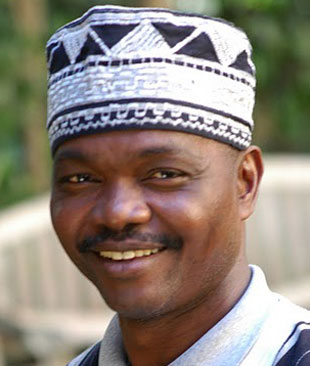