"Jon told us a Hasidic tale about a famous rabbi who was on his way to teach a village that was very interested in his ideas. This was going to be a very big event, and each Jew in the community made great preparations, pondering what question he or she might ask the wise man.

"The rabbi finally arrived and, after the initial welcome, he was taken into a large room where people gathered to ask their questions. There was tremendous anticipation and excitement all around.

"The rabbi walked silently around the room and then began to hum a Hasidic tune. Before long, everyone started humming along with his soft voice. As people became comfortable with his song, the rabbi started to dance. He danced everywhere in the room, and, one by one, every person danced with him. Soon everyone in the whole community was dancing wildly together. Each person's soul was healed by the dance, and everyone experienced a personal transformation.

"Later in the night, the rabbi gradually slowed the dance and eventually brought it to a stop. He looked into everyone's eyes and said gently, 'I trust that I have answered all of your questions.' ”

The People You Brought with You

"One day a student knocked on Chuang-tzu's door. The student had heard of Chuang-tzu's great wisdom from other teachers and had traveled a great distance to learn. He had studied many forms of philosophy, always seeking to add to his understandings. Chuang-tzu answered the door and the student said: 'I am an ardent student of philosophy and I have heard that you are very knowledgeable. Will you take me on as your student?'

"Chuang-tzu answered, 'Only if you tell all the people you brought with you to leave.'

"The student turned around to see who had followed him to Chuang-tzu's house but was surprised to see no one else around. At first the student was mystified, but then he understood what Chuang-tzu was telling him. Before he could learn, he had to let go of the outer concerns he carried in his mind to allow his inner nature to be nourished. We all carry with us the conditioning we received from our culture, including our attitudes and beliefs. Many of these also come from our upbringing, schooling, the groups we are in, and the country in which we live. Taoists encourage us to set external concerns aside to open the way for Tao."

— Annellen Simpkins and C. Alexander Simpkins in Tao in Ten

"One night in New York City I was standing outside the Schubert Theater during the play's intermission. The tuxedoed gentlemen were in an intense discussion with the evening-gowned ladies on the influence of Schopenhauer on Samuel Beckett's Theatre of the Absurd. I was about to deliver a timeless observation that would have precluded further discussion on the subject for at least a hundred years when an old woman peddling Variety newspapers approached. She was wearing sneakers and a cab driver's hat. I thrust a coin into her hand and snatched the paper. 'Could I talk with you for a minute, Father?" she implored.

"In those days I always wore the clerical collar. I knew I could not distinguish myself by my virtues, but I could by my clothing. I wore the Roman collar while taking a shower and placed it under my pajamas while I slept.

"As I turned around to my friends who were breathlessly awaiting my finale riposte, I heard the old woman say, 'Jesus wouldn't have talked to Mary Magdalene like that.' She disappeared down the street.
"The magnitude of what had happened hit me inside the theater. I had been so preoccupied with my own status that I treated the woman like a vending machine. I put a coin in her hand and out popped a magazine. I had shown no appreciation for the service she performed, no interest in her life, and an appalling lack of regard for her personal dignity. Preoccupation with my self-importance coupled with a failure to treat her with cordial love impregnated with respect for the sacredness of her unique personality only exacerbated her sense of worthlessness and further damaged her self-esteem."

— Brennan Manning in The Importance of Being Foolish 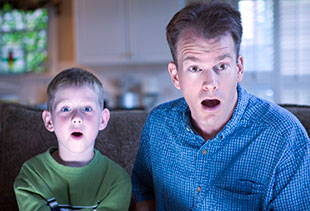