From Frederic and Mary Ann Brussat: On September 11, 2001, as New Yorkers and Americans, we experienced a full range of strong emotions. As we dealt with them, we were grateful to have a spiritual practice to turn to, and by the afternoon, we found ourselves working on an "I Am" prayer as an exercise in empathy and unity. Our prayer/poem, "Rest in Peace," was inspired by the work of the Buddhist peacemaker Thich Nhat Hanh. You can read it and the history of its impact by using the "Prayers & Mantras" link on this page under "More Resources on Anniversary of 9/11."

Years later, we still believe that empathy is a critically important practice for the people of our troubled world. Since that tragic day, much more death and destruction has been unleashed on our world, and our hearts go out to all those who have felt the brunt of war and its attendant agonies. Whereas in 2001 we felt quite alone as we struggled to phrase our response to terror, today we are connected to a group of sensitive, wise, and articulate Living Spiritual Teachers. On the 10th anniversary of 9/11, we asked them to contribute practices, meditations, and reflections, and many of them graciously responded. Their practices are still relevant as we near the 20th anniversary. You can find their suggestions using the "Spiritual Practices" link among the "More Resources on Anniversary of 9/11."

These teachers encourage us to work with primal emotions that surface in the present precarious global situation — fear, anger, thoughts about revenge, worry about security — and to develop the spiritual impulses of compassion, forgiveness, gratitude, hospitality, hope, peace, and unity. We are grateful to them for helping us make this anniversary of 9/11 — and other anniversaries to come — a time of spiritual practice and reflection. 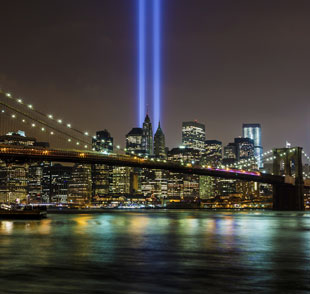 More Resources on Anniversary of 9/11