Topics A Celebration of Rumi

UNESCO (The United Nations Educational, Scientific, and Cultural Organization) declared 2007 the International Year of Rumi to commemorate the 800th anniversary of the birth of the great mystic and Persian language poet. Born in Balkh, presently in Afghanistan, on September 30, 1207, Jelaluddin Rumi migrated with his family to Konya, Turkey, where he lived most of his life. A great spiritual teacher in his time, he is "pir" (inspiration and founder) of the Mevlevi Sufi order popularly known as the whirling dervishes for their practice of "the turn."

Rumi's poetry has been loved, recited, and sung for centuries in Islamic countries — Afghanistan, Iran, and Turkey claim him as their own poet. He now has an equally large following in the West, recently being named the bestselling poet in America. In his day and in ours, his students are people from all traditions — Muslims, Christians, Jews, Buddhists, and others. He speaks to the universal yearning for a closer connection to the Divine.

We have been profoundly influenced by Rumi over the years (we are members of the Mevlevi Order). The God he praises is a God of Love who is known through our daily life, hence our emphasis at Spirituality & Practice on everyday spirituality. His spiritual vision is sensual, celebratory, and pensive. He identifies with nature and animals. He loves mysteries and is impatient with those who think they have answers. He praises the commonplace and spits upon fear which always brings human beings down. Always, Love is what's important — in the way we treat our neighbors and in how we relate to the Holy One.

For this celebration of Rumi, we have collected 30 readings from other admirers of his poetry, teachings, and personal witness. They include commentaries on Rumi's gifts to us, stories about his life, examples of his teachings, and tributes to his multiple contributions to our world. The readings are from mystic Andrew Harvey; translators Coleman Barks and Camille Helminski; biographers Annemarie Schimmel, Franklin Lewis and Leslie Wines; Mevlevi Sheikhs Kabir Helminski and Sefik Can; and others. 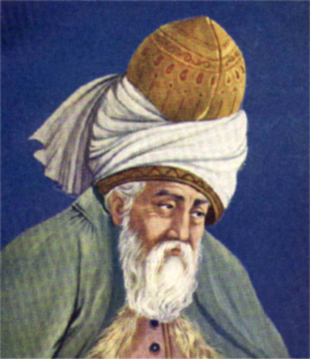 More Resources on A Celebration of Rumi