As Good As It Gets

Directed by James L. Brooks
Don't judge people too quickly. Never write anyone off. Even the weirdest and most irritating people are full of surprises.

Melvin (Jack Nicholson in an Academy Award-winning performance) is a successful Manhattan romance novelist who prefers to keep people at a distance. He verbally assaults neighbors and strangers and suffers from an obsessive-compulsive disorder that compels him to jump down the street in order to avoid cracks in the sidewalk. The only person who isn't frightened or appalled by him is Carol (Helen Hunt in an Academy Award-winning performance), a patient waitress at the restaurant he frequents.

In this hilarious drama about personal transformation, writer and director James L. Brooks (Terms of Endearment) pulls out all the stops. A little dog softens Melvin's heart and opens him up to the joys of generosity. Carol, whose son has chronic life-threatening asthma, is the lucky recipient of his largesse. When Melvin's neighbor Simon (Greg Kinnear) falls on hard times after he's robbed and severely beaten, the romance writer takes him in with great and warm hospitality. After demonstrating multiple kindnesses, Melvin is ready for the biggest challenge of all — learning to express his love for Carol.

As Good As It Gets is a shaggy dog romantic comedy. All its messages are worth taking to heart. Don't judge people too quickly. Never write anyone off. Even the weirdest and most irritating people are full of surprises. Everyone is capable of love. 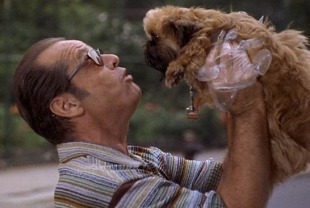