Directed by Steven Roloff, Tina Petrova
A documentary tracing a Canadian woman's journey to find out more about Rumi's incredible impact upon our world.

After praying for relief from the lingering pain of a terrible accident, Tina Petrova, a Canadian actress and filmmaker, had a dream in which the 13th century mystical poet, Jelaluddin Rumi, asked her to organize a festival in Toronto to showcase his work. The event was a success, thanks largely to the participation of Coleman Barks, whose translations have contributed to Rumi being the most popular poet in America for the last decade. By then, Petrova had embarked on a spiritual journey to find out more about Rumi's extraordinary impact upon the world.

This one-hour film, which originally aired on Vision TV in Canada, chronicles her quest. She talks with Kabir Helminski, representative in the West of Rumi's Sufi order, about Rumi's life, teachings, and contemporary influence. Andrew Harvey, a mystic who admits to being profoundly affected by Rumi, calls him the oxygen the world now needs. Nader Khalili, an architect and founder of Calearth Institute of Earth Architecture, talks about Rumi's understanding of the universe.

Two focuses of the film especially appealed to us. Over scenes of Turkish and American whirling dervishes, Helminski explains the meaning of the ceremony. It is a practice that requires you to become empty so that you can be balanced, centered, and fully aware of the Divine Presence. Another theme of the film and in Rumi's writings is religious openness. Like all the great saints, he was a great lover of unity. 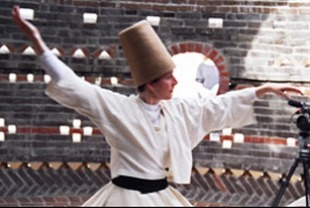