Directed by Christian Carion
An extraordinary film about a miraculous occurrence during Christmas in World War I when men laid down their arms and fraternized with the enemy.

In the opening scenes of this French film written and directed by Christian Carlon, school boys in France, England, and Germany recite phrases they have been taught about the glories of their country and the scourge of their enemies. In this brief scene we see how people are brainwashed to see war as just and to believe that God is on their side. Add to this the perception that by going to war young men are protecting their families and their land, and it's easy to understand the enthusiasm that can sweep through a community at the outbreak of conflict.

In 1914 Scottish brothers William (Robin Laing) and Jonathan (Steven Robertson) excitedly enlist to fight in World War I; they are looking forward to what they regard as an adventure. Palmer (Gary Lewis), their Anglican minister, goes to the front with them as a stretcher-bearer. In Berlin, Germany, a military official interrupts a performance at the opera house to announce that the country is at war. Tenor Nikolaus Sprink (Benno Furmann; songs performed by Rolando Villazon) is drafted; his lover, Anna Sorensen (Diane Kruger; songs performed by Rolando Villazon), a famous soprano, knows that their lives will never be the same again. Meanwhile, French Lieutenant Audebert (Guillaume Canet) prepares to leave for the front lines without knowing whether his wife, left in German territory, has given birth to their child.

None of these men is prepared for the senseless barbarity of what is to come. Audebert's French troops and a Scottish regiment led by Gordon (Alex Ferns) live in muddy trenches just a few yards from the German lines commanded by Horstmayer (Daniel Bruhl). Many of them die in a senseless charge toward the Germans, who use machine guns to mow them down. A Scottish soldier tries to carry his wounded brother to safety but has to leave him to die in the no-man's land between the trenches.

As Christmas nears, the German command sends Christmas trees with lights and tinsel to their troops. The Scottish and French troops receive packages with liquor and trinkets. Anna Sorensen, the opera singer, uses her beauty and charm to get Sprink brought from the front to join her for a concert at German headquarters. Afterwards, he convinces her to return with him to the trenches to sing to his comrades.

Meanwhile, on the French and Scottish side, Palmer tries to lift the men's spirits with a rendition of "Dreaming of Home" played on the bagpipes. In the German trenches, with Anna standing by him, Sprink sings "Silent Night." He follows this classic with "O Come All Ye Faithful," and Palmer joins him with bagpipe accompaniment. The tenor then grabs a Christmas tree and while singing walks toward the enemy. No shots are fired, and soon the men from Scotland, France, and Germany have laid down their arms and are feeling the Christmas spirit of sharing and joy. While the commanders drink champagne together, others show pictures of their wives and children and share treats from home, including chocolate. Palmer gathers them for a mass, and Anna sings "Ave Maria." It is a moment of true communion and beauty.

On Christmas Day, the commanders call an "official" truce to allow everyone to bury the dead. More camaraderie takes place with a soccer game and then the most incredible sign of mutual respect — the Germans warn the Scottish and French soldiers that they are about to be shelled and invite them to take refuge on the German side. The Scottish and French return the favor when their side retaliates with more barrages from afar. Sadly, the men realize that they must return to the business of war, but they have all been changed by the experience.

This story is inspired by the Christmas truce of 1914, a miraculous occurrence of peace for two days when men laid down their arms, came out of their trenches, and celebrated the holiday together. The aftermath depicted in the film is also part of history. The German, French, and Scottish commanders were severely reprimanded for "fraternization with the enemy." New troops were brought in to replace those who had been tainted by the experience. After all, war depends upon seeing the other side as subhuman.

In a disturbing scene, Palmer, the Anglican priest, is harshly criticized by his bishop, who argues that Jesus did not come to bring peace but a sword. Later, we see the bishop telling the new recruits that they are in a crusade, a holy war for freedom. Hearing these words and realizing how far this view is from the teachings of Jesus, Palmer takes off his cross, leaves it on a bedpost, and walks away.

Elsewhere, the French lieutenant is being shamed by his father, who is also his military superior. He replies, "We have more in common with the German soldiers than with the French politicians that are sending us off to war." How true; it is the soldiers on the ground who most want peace. This movie reverberates in our hearts as we realize that these messages are relevant to present-day situations.

Special DVD features include a commentary by writer/director Christian Carion and an interview with Carion. 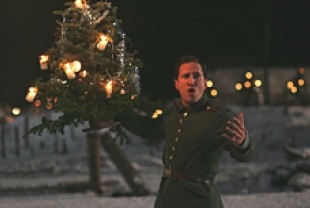 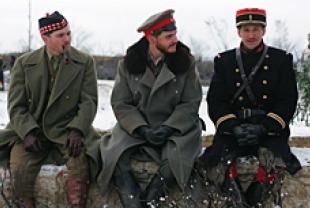 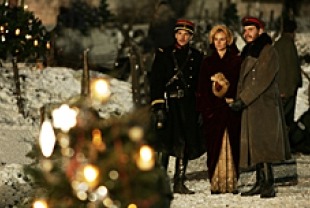 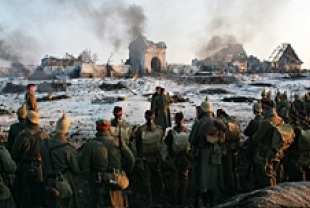 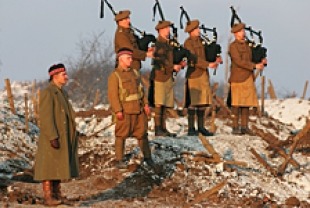