Directed by Ryan Fleck
An engaging American drama about friendship as a curative force that can reach across the generations and transcend even racial barriers.

Friendship is an odd duck; it can happen at any time, cross generations, and bring people together who are different in every way. That is the case in this emotionally appealing film about the relationship that develops between an idealistic high school teacher in a ghetto school and lonely 12-year-old African-American girl. The magic works thanks to two superlative performances by Ryan Gosling and Shareeka Epps.

Dan Dunne (Ryan Gosling) was raised in a liberal family of do-gooders who protested the Vietnam War. He has taught in an inner-city school for years but the tension has taken a toll on him. In order to get by, he uses crack and other drugs. His ex-girlfriend Rachel (Tina Holmes) stops by one day to watch him coach the girl's basketball team. Dan is uneasy in her presence and declines to go out for some coffee with her later. After the game, Drey (Shareeka Epps), one of his brightest students, finds Dan passed out in a bathroom with some crack. This secret bonds them together in way that neither one expects. She doesn't have much of family life at home: her mother works double shifts and rarely sees her; her father is out on his own; and her brother is in prison.

Dan is impressed with Drey's seriousness in the classroom. He teaches history and tries to inspire the mostly African-American kids to study various protests against injustice in the United States. Although the principal is not happy with his free-form classroom methods, Howard Zinn would be pleased as punch with his radical brand of history! But each day, Dan finds himself sinking into a deeper reliance on drugs. His reunion with Rachel is ittersweet. They met in a rehab program, and she has stopped using drugs and is engaged to be married. Dan scrambles to find some companionship and has a fine evening with a pretty teacher (Monique Curnen), but he blows it on another date when gets stoned and he forces himself on her late in the night.

Although Dan defines history in terms of the tug of opposites and change, he seems helpless to initiate a transformation in his own life. So he does the next best thing, which is to act on his nurturing instincts for Drey. She is more than happy with the attention he gives her and her many kindnesses toward him are the only source of warmth in his downward spiraling life. When he sees that Frank (Anthony Mackie), a drug dealing buddy of Drey's brother is making an effort to get her into the business, Dan reaches out to save her. Of course, he knows in his heart that eventually he'll have to do something about saving himself.

Half Nelson is a beautifully acted film about the healing power of friendship and the astonishing ways in which it can reach out across the generations and transcend even racial barriers.

Special DVD features include deleted and extended scenes, outtakes, the filmmakers' commentary, and a music video of Rhymefest "Wanted." 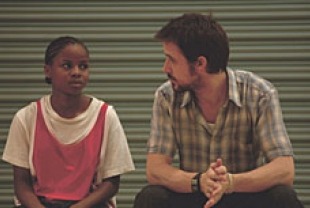