Lady and the Tramp

Lady (voiced by Barbara Luddy) is a very pampered cocker spaniel who is used to being the center of attention in the home of Jim Dear (Lee Millar) and Darling (Peggy Lee). As a puppy, she figures out how to have her own way and get to sleep in their bedroom instead of in the cellar. Lady grows up in a tranquil neighborhood where an adventure is chasing birds or catching the morning newspaper on the fly. Her two best friends are Trusty (Bill Baucom), an old Bloodhound, and Jock (Bill Thompson), a Scottish Terrier, who make quite a fuss over her.

One day the mistress of the house says of Lady, "I don't imagine anything would ever take her place in our hearts." But then Jim Dear and Darling have a baby, and Lady's world changes dramatically. When the new parents go away for a few days, Aunt Sarah (Verna Felton) comes to take care of the infant, bringing with her a mischievous pair of Siamese cats who cause quite a disturbance in the house. When this outsider purchases a muzzle and puts it on Lady, the little dog runs away in shame.

Meanwhile, on the other side of the tracks, Tramp, a roguish mutt, lives without the restrictions of being controlled by humans. He has no collar around his neck, and he does what he pleases in a world where there is not a lid on every trash can and a fence around every tree. Tramp chases chickens just to see them scatter, and he regularly gets food from businesses in the area.

When this footloose adventurer meets Lady, he is impressed with her beauty but skeptical about her enjoyment of being a pet. He finds a way to liberate her from the muzzle but she gets caught and taken to the pound. There Lady witnesses the sad lives of captive dogs and the tragic fate of those who run out of options. For Lady and the Tramp, however, it all turns out okay.

This 50th Anniversary 2-Disc DVD captures the ample delights of this 1955 animated classic directed by Hamilton Luske, Clyde Geronimi, and Wilfred Jackson. The film is prefaced with a quotation by Josh Billings: "In the whole history of the world there is but one thing that money cannot buy — to wit — the wag of a dog's tale."

There are quite a number of magic moments in the film which, we're not afraid to admit, we remember from when we first saw it in the 1950s, including the scene when Tramp treats Lady to a spaghetti dinner outside an Italian restaurant as they are serenaded with the song "Bella Note." Equally memorable is the chant "We are Siamese if you please!" from "The Siamese Cat Song." That taunting tune triggered a response from some cave in the back of our minds!

This Platinum Edition includes an entire disc of extras including never-before-seen deleted scenes, the original 1943 storyboard version of the film, a 52-minute documentary "Lady's Pedigree: The Making of Lady and the Tramp," and a host of games and activities to enhance the viewing experience: "Disney Dog Trivia," a virtual board game; "Virtual Puppy," where you can adopt and care for one of the dogs; "PuppyPedia," about dog breeds; and more. 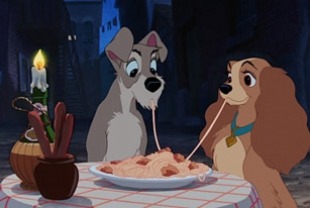