Directed by Amos Gitai
A powerful and sensitive film which takes us beyond racial and ethnic hatreds and bring us together in salutary ways.

Rebecca (Natalie Portman), an American, is sitting in a chauffeured car near Jerusalem's Wailing Wall. She is emotionally worked up over something and begins sobbing. A Passover song plays in the background, one of those stories about an line of events (the cat ate the lamb, the dog choked the cat, the stick beat the dog, the fire burned up the stick, the water put out the fire) which asks the question, "How long will this hellish circle last?" It's one we will be encouraged to contemplate as we learn the communal histories of these characters.

Hanna (Hanna Laslo), the middle-aged Jewish driver, tells her passenger that she wants to drop her off now since she must go to Jordan for a very important meeting. Rebecca, still distraught, begs to accompany her since she has nothing better to do and needs a distraction. Hanna, who is very anxious about this trip, agrees to take her along. They have little trouble at the Israeli side of the border but are questioned about the contents of their car by the Jordanians.

Through superimposed images of the past, we learn that Rebecca has just broken up with her Jewish boyfriend, a soldier who had sex with a Palestinian woman and may have killed her afterwards. Hanna carries her own wounds, which are revealed in a flashback; her husband Moshe (Uri Klauzner) who sells armored cars to Iraq, has been injured in a terrorist attack. The two women arrive in the Free Zone, an ungoverned, customs- and tax-free region where people from Syria, Iraq, Saudi Arabia, Jordan, and Israel buy and sell goods. Here religion and politics are set aside for the sake of business transactions.

Hanna, who by now is tired and very irritable, expects to meet with an American business partner who owes Moshe $30,000. But instead she is greeted by Leila (Hiam Abbass), a Palestinian who is somehow related to the American and is upset that Moshe has not come. Although she is unnerved by Hanna's aggressive and angry behavior, Leila finally agrees to take the two visitors to the American's farm. The closing sequences in Free Zone depict the ways these three woman struggle to cope with being thrown together and their various situations.

Israeli filmmaker Amos Gitai has made an effective and engaging movie about border crossings, women as bridge builders, and the scars of war and violence upon those who live in the Middle East. This is the first Israeli production shot in cooperation with the Jordanian Royal Film Commission, and the first Israeli fiction film made in an Arab country.

Gitai wants us to become more sensitive to those qualities and emotions which take us beyond racial and ethnic hatreds and bring us together in salutary ways. It is a noble goal and one which makes the open-ended finale more understandable and palatable. 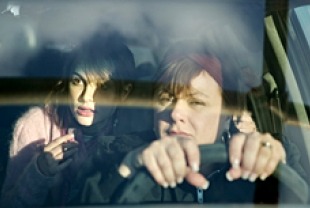 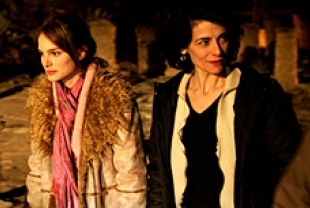