The Blood of My Brother: A Story of Death in Iraq

Directed by Andrew Berends
A scary and illuminating documentary made by an American that draws out our empathy for the grieving families of slain civilians in the Iraq war.

On April 10, 2004, Ra'ad was shot to death by American soldiers while serving as a guard at the Kadhimiya mosque in Baghdad. His 19-year-old brother Ibrahim is unhinged by the death of the family's breadwinner. His older brother had just set up a portrait photo shop and now it falls upon Ibrahim's shoulders to take over the place. Ra'ad is proclaimed a martyr in the cause of Islam and everyone talks about him as a hero. All that his brother knows is that he misses him since they did everything together. In one unpleasant scene, a lamb is sacrificed for the dead young man. After 40 days have passed, Ra'ad's mother, sisters, aunts, and uncles go to the graveyard where he is buried and mourn the loss of a son, a surrogate father, a brother, and a nephew.

American filmmaker Andrew Berends has made a scary and illuminating documentary that enables us to understand the grief, the feelings of revenge, the anger, and the frustration of the Iraqi people whose lives have been torn apart by the violence of the occupiers and the clashes between the Sunnis and the Shiites. The mood here is one of unresolved tension as citizens scurry to take cover when gunfire begins, when tanks roll down the streets, or helicopters fly overhead. American troops talk about defending themselves against enemies and are shown conducting night raids in homes and smashing a stand in a market where some guns were being sold. Equally disconcerting are the hate-filled speeches and rallies of the militant Shia movement of cleric Sayid Moqtada al-Sadr.

One Iraqi laments: "Americans bombed us while we were in the house. I don't know if they are helping us or not." The same fear and confusion is in the face of a young girl whose mother has been killed in a missile attack and her father wounded. The hospitals are filled with twisted and torn bodies of people suffering excruciating pain.

The Blood of My Brother: A Story of Death in Iraq draws out our empathy for civilians who are the collateral damage of the war in Iraq. Those who love and mourn them offer testimony to their enduring memory.

The DVD extra features include the theatrical trailer, deleted scenes, and a director's commentary. 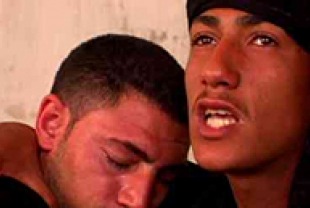