Lady in the Water

Directed by M. Night Shyamalan
A spiritual story that challenges us to deeply listen, to let its mysteries work on our hearts and souls, until we discover what part is ours to play.

In all times and cultures, people have told stories. In the beginning, survival probably depended upon storytelling as people sat around campfires and heard the stories of how others had met challenges and persevered. Over time, stories proved to be good medicine for children, conveying important lessons about the values and visions of a community. Stories enabled individuals to fly on the wings of imagination or to plumb the depths of their souls. And stories knit people together by revealing their mystic connections to all of creation.

In his seventh film, writer and director M. Night Shyamalan has put on screen a story that began as an impromptu bedtime tale for his two daughters. It enchanted them, but is the movie-going public as ready for a saga about a diverse group of people who are thrown together for a quest that will test their souls and perhaps save the world? A narrator in the film's prelude describes the human dilemma. We have lost the capacity to listen to otherworldly stories. Our minds are so cluttered with details, with a smorgasbord of incoming messages and a swarm of pressures, that we can't stop and still ourselves enough to be able to listen deeply.

We'd add other factors to this bleak assessment of the human condition. Our culture surrounds us with so many bogus stories from reality programming on television, to formula action dramas, to gory horror stories that mix humor with excessive violence. Is it possible that we have become incapable of giving ourselves over to a story about human kindness? Are we so consumed by consumerism and cynicism that we can't see the gold that exists within each and every person? Many individuals in our time have become immune to spiritual stories thanks to their reliance on reason or a scientific worldview. They flinch at words like mystery or imagination as if they were harbingers of silliness or worse things. Frankly, they are not going to get this movie in the same way as someone who can still engage soulfully with stories. Those who are willing to open their hearts, to be still, and to be receptive to the distinctive rhythms of Lady in the Water will discover riches in the experience of listening to this otherworldly tale.

Cleveland Heep (Paul Giamatti) is a handyman and caretaker at the Cove apartment complex in suburban Philadelphia. He is a lonely and isolated man with a stutter who spends most of his time fixing broken appliances and doing minor repairs around the complex. One night, while investigating sounds coming from the swimming pool, he stumbles and falls in the water. He wakes up later in his apartment to find that a strange woman has rescued him. Her name is Story (Bryce Dallas Howard), and she is destined to change his life. She is a "narf," a sea nymph from the Blue World who has been living in a cavern underneath the Cove's pool. She is on a special mission that requires her to make contact with some humans before journeying back to her home.

Story draws out Cleveland's nurturing side as he becomes determined to help her. His friend Young-Soon (Cindy Cheung) learns from her traditional Korean mother, Mrs. Choi (June Kyoko Lu) that there is a time-honored bedtime story about a narf. It explains Story's purpose in coming to the Cove, who she needs to meet to fulfill her destiny, and why a very vicious creature is out to stop her. This animal with fur that looks like grass appears on the edge of the woods near the Cove.

Cleveland has very little self-confidence thanks to a tragedy that happened years ago, after which he abandoned his career as a doctor. But with new energy and firm resolve, he rallies the other tenants to help Story. According to Mrs. Choi, the narf needs the special skills of a symbolist, a guardian, and a guild to make it possible to return to her mythological world; and, if things don't go well, she may need a healer.

Mr. Faber (Bob Balaban), a film and book critic who has just moved into the Cove, tells Cleveland: "There's no originality left in the world and no new stories. They're just the same old stories being retold again and again." Is he the one who is the symbolist? Or could that be Mr. Dury (Jeffrey Wright), a crossword puzzle wizard who lives with his young son (Noah Gray-Cabey). Could Mrs. Bell (Mary Beth Hurt) be the healer? She is an animal lover who nurses strays back to life. Other candidates include the loner (Bill Irwin), the husband who has no secrets (Tom Mardirosian), and Reggie (Freddy Rodriguez), a self-obsessed young man who is engaged in a body-building experiment. And who are the guild? Could it be that group of guys who hang around shooting the breeze and smoking pot? The two tenants most connected to Story's fate are brother and sister Vick (M. Night Shyamalan) and Anna Ran (Sarita Choudhury). He's writing a book of political arguments that could some day be very influential. He has a burst of creativity after meeting Story; she calls it an awakening.

To reap the bounties of Lady in the Water we need to put outselves in the picture. That's easy to do since Shyamalan has created characters who are very much like us. Cleveland, Mr. Dury, and several others, including Story herself, doubt their talents and are unsure that what they are being asked to do is really theirs to do. Many of us struggle with golden projections, attributing to others the inner resources that are rightfully ours. "Is this really my purpose," we ask?

Even when we think we are doing the right thing, fear can immobilize us and send us into retreat. Like Cleveland, we have to look the beast directly in the eyes if we are to become all we are meant to be. Although all the tenants of the Cove live in their own separate worlds, they come together for this mission that requires them to cooperate. Everyone has a contribution to make. We should keep that in mind whenever we want to write someone off as odd, difficult, or unlikable; that person may have the key to unlock a door within us that has been closed for far too long.

Lady in the Water is a spiritual story that speaks to us about faith, mystery, questing, our inner self, and the wonders that can unfold when people band together for a common cause. In The Communion of Saints, James Carroll observes:

Cleveland is saved because of Story. How about you? Enter the movie theater with an open heart and mind and become an attentive listener. Then step into this story and see what part is yours to play. 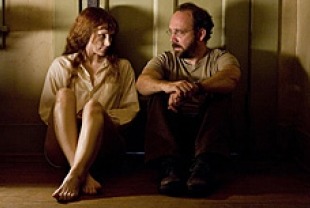 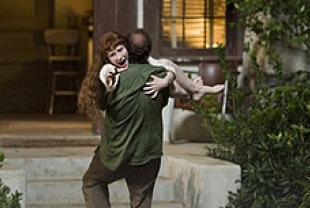 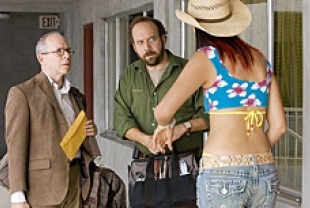 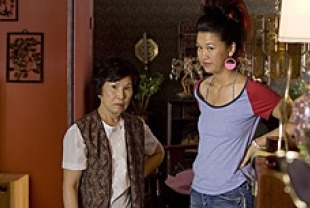 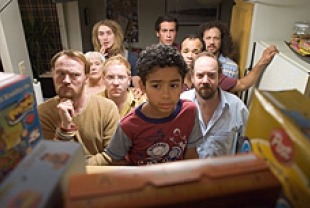 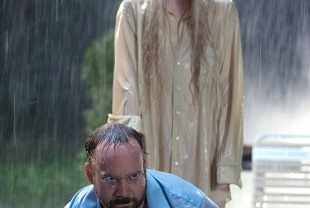