Directed by Laurent Cantet
A fascinating French film about two cultures in collision and the sexual drives of middle-age women vacationing in Haiti.

Heading South, adapted from three short stories by Dany Laferriere, is set in Haiti in the late 1970s. The island, which depends upon income from tourism, is ruled over by the dictator Jean-Claude Duvalier, a violent man who spreads fear among the mostly poor residents. In one scene, a cop destroys the stand of a young boy selling drinks under the burning sun; there is no reason for his action, just one nasty man using his power to humiliate another human being.

In the opening scene, Albert (Lys Ambroise) is at the airport awaiting the arrival of Brenda (Karen Young), from Savannah, Georgia, who visited his resort three years ago. A woman approaches him and asks him to take her beautiful teenage daughter since she fears for her own life. Albert politely refuses, and we can see the woman's disappointment in her face.

Albert is one of four characters who speaks directly to the camera in this examination of cultures intermixing. He is from a family that resisted an American invasion of Haiti in 1915. His grandfather described white men as animals. Albert states that the Americans now conquer with something more dangerous than guns — their money: "Everything they touch turns to garbage."

At her first night at the resort, Brenda has dinner with Ellen (Charlotte Rampling), a teacher of French literature at Wellesley who has spent the last six summers vacationing at this seaside hotel, and Sue (Louise Portal), a French Canadian who runs a warehouse in Montreal. In her speech to the camera, Brenda describes her encounter three years ago with Legba (Menothy Cesar), a fifteen-year old Haitian who had been was treated kindly by her husband; she secretly seduced him on the beach and experienced her first orgasm. Back for more uninhibited sex in paradise, Brenda is shocked to discover that Legba is also the lover of Ellen, who says quite frankly to her: "I always told myself that when I'm old I'd pay young men to love me. I just didn't think it would happen so fast." This 55-year-old woman, who seeks pleasure wherever she can find it, also confesses: "If you're over 40 and not as dumb as a fashion model, the only guys who are interested are natural born losers or husbands whose wives are cheating on them."

Brenda, who is now divorced, is a romantic who actually believes that Legba might one day return with her to America as her husband. Although Ellen pretends to accept the fact that Legba only services her for money and gifts, she, too, has her own fantasies of escape with him to a better life. And what of this handsome young man who has two middle-aged women competing for his body and attention? He has his own problems with a former Haitian girlfriend.

Laurent Cantet is a bold and visionary French director whose two other films are ethical to the core: Human Resources and Time Out. The problems caused by money and class are at the heart of all three dramas. Although Ellen and Brenda think they know Legba, they do not have a clue as to the poverty and violence that makes Haiti such a dangerous place to live. Cantet treats all of the characters in this fascinating drama with respect as they try to find a little portion of happiness. 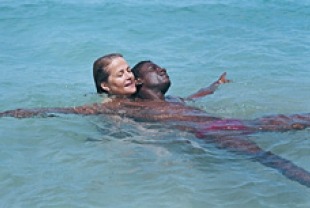 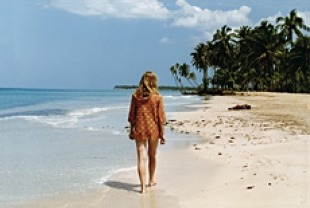