The Last King of Scotland

Directed by Kevin Macdonald
One of the best films of the year with its depiction of the dynamics of power in politics and the dangers that ensure when paranoia overtakes a leader and those around him.

It is 1971 and Nicholas Garrigan (James McAvoy) has just graduated from medical school in Scotland. His stern and controlling father toasts his accomplishment, but back in his room, this angry young man, who cannot abide his do-good parent, lets out a primal scream and then spins the globe to find out where destiny will take him. When his finger lands on Canada, he sighs and tries again. This time he lands on Uganda.

Nicholas is looking for adventure and experiences that will stretch him. On the bus to the village where he will work, he meets an attractive African woman who speaks English, and he has sex with her. When he arrives at the hospital, he is overwhelmed by the number of people who need help. His superior, Merrit (Adam Kotz), is a hard-working English physician whose wife Sarah (Gillian Anderson) seems to be deprived of any pleasure. Nicholas takes her on jaunt to the capital of Kampala to hear a speech by Uganda's new president Idi Amin (Forest Whitaker). The English in the country are backing this politician, who has just taken over from Milton Obote, a corrupt Communist-leaning leader. Amin promises the people that he will take care of them by building roads, schools, and houses. Sarah is skeptical about the leader's ability to deliver, but Nicholas is impressed with his charisma.

On the way back to the village, they are stopped by Amin's aides. The president has injured his hand and they want the doctor's assistance. Nicholas takes charge of the tense situation and even dispatches a wailing cow who caused the accident. It turns out that Amin has a soft spot in his heart for the Scottish and is thrilled to learn that this capable young man is one. Back at the village, Nicholas makes a play for Sarah, but she turns him down. This makes it much easier for him to accept an offer to become Amin's personal physician. Plenty of perks come with the job, including a fancy apartment within the presidential compound, a Mercedes, and closeness to Amin's power as his personal advisor.

The Last King of Scotland is one of those rare movies that sweeps us away to a far-off place and immerses us completely in the adventures of the protagonist. It helps that Nicholas is open to change and the surprises that may come his way. This enthralling drama is directed by Kevin Macdonald and based on a well-received 1998 novel by Giles Foden. The screenplay by Peter Morgan and Jeremy Brock more than delivers the goods with its thought-provoking themes of power, love, trust, betrayal, paranoia, and fear-based living.

Forest Whitaker gives an Academy Award caliber performance as Idi Amin, whom historians have labeled one of the true monsters of the twentieth century. It is estimated that he was responsible for the death of 300,000 Ugandans in his reign of terror. Yet the American actor makes him into a complex and complicated human being whose friendship with Nicholas is genuine and filled with many moments of intimacy, humor, and generosity. But his paranoia about those out to kill him or bring him down transforms him into a very dangerous and unpredictable man. In the film, Nicholas never knows which Amin will show up.

Mixing fiction with fact, the drama unspools the close relationship between the president and his most trusted advisor. Amin charms those around him and to this day many Ugandans speak positively about him. Scottish actor James McAvoy, who played the key character of Mr. Tumnus the Faun in The Chronicles of Narnia: The Lion, the Witch and the Wardrobe, presents Nicholas as very energetic and adventuresome. He finds in Amin the father he never had, a man who singles him out as special, smart, and worthy of doing great things. But Nicholas messes things up thanks to his unbridled sexuality.

One of his most interesting relationships is with Stone (Simon McBurney), a wheeling and dealing British Foreign Service officer whom he first despises and later desperately needs to help him. Another relationship that really changes things for Nicholas is his involvement with Kay (Kerry Washington), one of Amin's wives; she has a son with epilepsy and has been ostracized because of his malady.

There is an Ashanti proverb that goes: "The responsibility of power is like holding an egg. Grasp it too tightly and it will drip through your fingers; hold it too loosely and it will drop and break." The Last King of Scotland is one of the best films in many a moon on the dynamics of power in politics and the dangers that ensure when paranoia overtakes a leader and those around him. 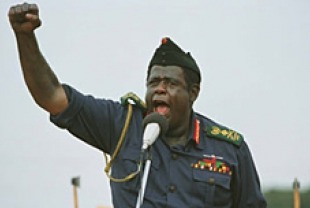 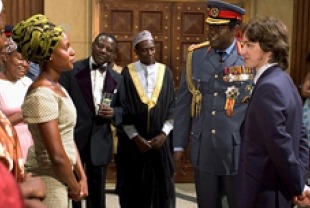 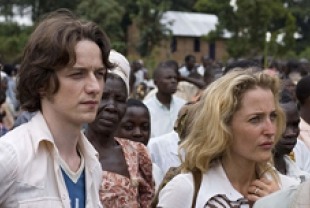 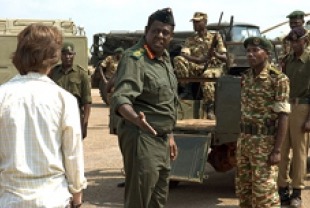