Hats off to director Richard Linklater for making this muckracking film in a time when such movies rarely see the light of day. It is based on Eric Schlosser's bestselling 2001 book which paints a scary picture of the fast food industry and its incredible hold on the American stomach and psyche. As is typical of his creative movie-making, Linklater has turned this work of investigative journalism into a thought-provoking ensemble drama that covers subjects usually viewed as too hot to handle — the plight of illegal aliens and working class people, corporate malfeasance, sustainable agriculture, and workplace safety.

Here are some statistics to keep in mind as you watch this film:

• Americans now eat about 13 million hamburgers a year. If you put all those burgers in a straight line, they would circle the earth more than 32 times.
• About one out of every eight American workers has at some point received a paycheck from McDonalds.
• Americans currently spend about $134 billion dollars per year on fast food — more than they spend on college education, computers, software, or new cars.

Don Anderson (Greg Kinnear) is sitting on top of the world as the marketing wizard behind "The Big One," the bestselling burger of Mickey's Fast Food chain. But he is shocked when his boss calls him into his office and tells him that tests show there is "shit" in the burgers. He needs to go to Cody, Colorado, to investigate what is going on at UMP, the meat-packing plant where the Big Ones are made and frozen before being shipped all over the country. He is not happy with the assignment and arrives reluctantly in a town filled with strip-malls and fast food establishments; in the surrounding countryside, cattle ranches are being replaced by new housing developments.

The first person he meets at Mickey's Fast Food is Amber (Ashley Johnson), a smart teenager who hasn't thought much about her job as a cashier until her Uncle Pete (Ethan Hawke) reveals his shock that she is working in such a place. By chance, she meets some college youth who let her join their "Environmental Policy Group." She surprises herself by coming up with a plan to free the local feedlot cows who are facing eventual slaughter at UMP.

Tony (Esai Morales), Amber's boss at the Mickey's franchise in Cody, sends Don to meet with Rudy (Kris Kristofferson), a rancher who has nothing but scorn for UMP as a money-making machine that doesn't care about the safety of its workers, the health of the American public, or humane treatment of the animals. Don also talks with Harry (Bruce Willis), Mickey's local supplier who claims that he is over-reacting to the problem of fecal matter in the burgers. He says: "Just cook it, that's all you have to do and everything will be alright." Harry concludes philosophically that "we all have to eat a little shit from time to time."

The free-floating structure of the film, reminiscent of Robert Altman films like Nashville, opens up many little-known aspects of the fast food industry. The hard-hitting screenplay by Linklater and Eric Slosser does a fine job putting us in the shoes of three Mexican immigrants who are transported into Cody by Benny (Luis Guzman). While her sister Coco (Ana Claudia Talancon) and her boyfriend Raul (Wilmer Valderrama) get jobs at the packing plant, Sylvia (Catalina Sandino Moreno) decides to work as a cleaning woman. Mike (Bobby Cannavale), a womanizing supervisor at UMP, hates the Mexicans and gives them a hard time. Raul and Sylvia are hard workers but their American Dream is soon shattered by the company. Only a few bold filmmakers have tried to tell stories of these people and the challenges they face.

Fast Food Nation may change your life. Scenes at the meat-packing plant could make you a vegetarian or at least an avid defender of sustainable agriculture. Seeing the dire impact of this industry on workers, animals, and communities could make you forswear ever eating fast food again. 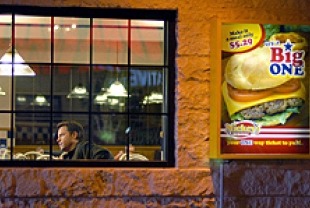 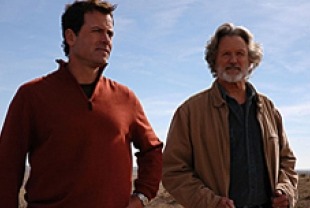 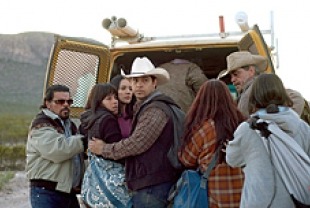 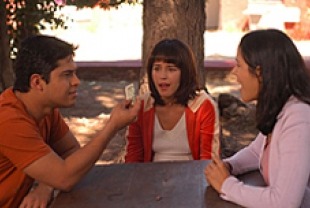 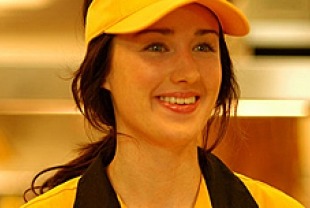 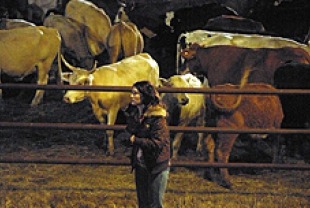 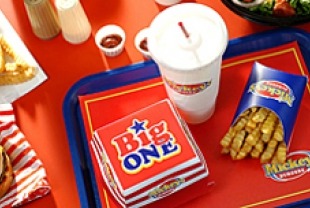