Directed by Greg Mottola
A raunchy flick about parties and having sex that really wants to say something about male friendship.

Down through the ages, young men have tried to drink as much booze as they can to be ready for a confrontation with the mystery and adventure of sex with a woman. Many movies about this theme have focused on male camaraderie on this quest, including American Graffiti, Dazed and Confused, and American Pie. Every year the screenplays seem to get raunchier and raunchier. This is certainly true of the latest entry into the field, Superbad, directed by Greg Mottola (The Daytrippers). It has moments of hilarity and also a few quite affecting emotional scenes. But the audience for this comedy is definitely young and male.

Seth (Jonah Hill) is an overweight loudmouth whose only friend is the quiet, serious, and shy Evan (Michael Cera). They are both in their last year of high school and want to get laid before they head off to separate colleges. Seth is miffed that Evan got into Dartmouth and he didn't. Perhaps that is what is driving him to have some fun. He is obsessed with sex and can't stop talking or thinking about it. When Jules (Emma Stone), a popular girl, invites him to a party at her house and gives him $100 to buy some booze, he is in seventh heaven. Seth is convinced that he can have sex with her at the party. Evan makes sure that Becca (Martha MacIssac), the girl who turns him on, will be there as well.

The key to pulling off the big adventure is Fogell (Christopher Mintz-Plasse), a nerdy buddy of Evan's whom Seth can't stand. Since he has just gotten a fake ID, he is given a list of liquors to purchase. Only trouble is that the liquor store is robbed while he is there and two policemen (Bill Hader and Seth Rogen) show up. They volunteer to take Fogell to the party but are detoured along the way. Meanwhile, Seth and Evan wind up at another party and run into trouble with some cocaine sniffing rowdies. Finally, all three high school boys arrive at Jules' place and have their own special encounters with the opposite sex.

The screenplay by Seth Rogen and Goldberg starts out presenting the familiar humiliations of two losers but ends up in a very different place. The bond between the two boys is based on Evan's enjoyment of Seth's outspokenness. Both of them are scared to death of women and feel inadequate in their presence, no matter how hard they try. What they do share is a platonic love for each other and to see them say the words is the most startling moment in the movie. In Superbad, all the raunchiness is just a cover for deep feelings of friendship that are too bewildering to admit or to explore further. 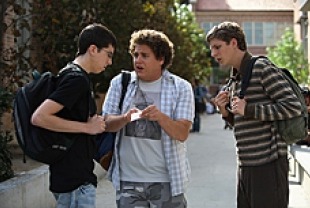