Directed by Patricio Guzman
A heartfelt documentary about Salvador Allende, the charismatic and idealist leader of Chile who sought to bring a fair and free world to his people.

Thirty years after the Popular Unity government of Chile was overthrown by a military coup, Chilean filmmaker Patricio Guzman returned to his homeland to make a documentary about the charismatic and idealistic socialist Salvador Allende. The result is a very poetic and passionate film about a leader who wanted to give power to the people and to make sure that justice reigned in a society where most of the wealth was concentrated with the very few at the top. Guzman uses rare archival footage and interviews with family, friends, and colleagues, as well as ordinary citizens who were caught up in Allende's long campaign to be elected to the highest office in the land. The love that workers and ordinary people directed toward this visionary comes across with great emotional impact.

The first three years after Allende's election were filled with radical changes which shook the nation, including the nationalization of large- scale industries and an ambitious agrarian reform program. Guzman interviews the former U.S. Ambassador to Chile, Edward Korry, who recounts how Allende's election infuriated President Richard Nixon, who initiated the CIA-sponsored coup that overthrew his regime. Korry expresses the American fear that Allende's government would become subservient to Communist Russia and Castro's Cuba. They were right about one thing: this reformist leader was opposed to the power of multinational corporations and spoke out against them in an address delivered to the United Nations.

Guzman presents an up-close and personal look at Allende through interviews with two of his daughters, Carmen and Isabel, among other relatives; his nanny; and his personal secretary. Allende, a Valparaiso-born doctor, had a great sense of humor to go along with his ardent belief in a peaceful revolution. The latter may account for his failure to arm and mobilize a people's militia as a safeguard against the army, a subject debated in the documentary by former militants from other political parties.

Some have branded Allende as "a dreamer" who did not understand real power. Guzman presents Allende as an idealist who wanted to bring to the people "a fair and free world." The documentary is a heartfelt tribute to one of Latin America's true heroes. 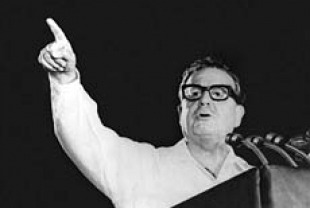 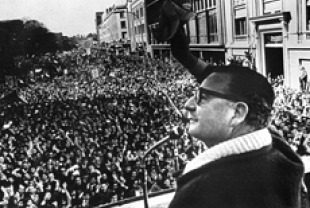