Directed by Robert Benton
A positively enchanting romantic drama that speaks volumes about love and challenges us all to grow a bigger heart.

Portland professor Harry Scott (Morgan Freeman) is fascinated with the different shades of love and the ways our lives are shaped and surprised by this poignant and unpredictable force. He muses that when the Greek gods were bored, they invented humans. Still bored, they invented love. That wasn't boring, so they tried it themselves. And then they invented laughter — so they could stand it.

Harry and his wife (Jane Alexander) are in the midst of mourning the death of their college-educated son due to an overdose of heroin. Harry has taken a leave of absence from teaching, and she worries that he will not want to go back. He spends a lot of time at a local coffee shop called Jitters. The manager is one of his best friends, Bradley (Greg Kinnear).

One day after watching Bradley's wife Kathryn (Selma Blair) play in a softball game, they all go for coffee and a woman from the opposing team comes to the table. While Bradley talks to him, Harry, who is an astute observer of human nature, notices that the two women are flirting with each other. Shortly afterwards, that attraction turns into a romance, and Kathryn tells her husband that he never really saw or understood her. The incident that precipitates her farewell is Bradley's gift of a dog he got from the pound. Kathryn has always told him she is afraid of dogs, but he thinks he can change her. That doesn't work, and their marriage dissolves as she walks out the door. As a consolation prize, Bradley keeps the dog.

Chloe (Alexa Davalos), a newcomer in town, takes a job at Jitters and immediately falls in love with Oscar (Toby Hemingway), a recovering drug addict who works there. The two of them begin a torrid romance that is built on a vibrant sexual connection. He is living with his father (Fred Ward), a violent man who drinks too much and has little respect for his son. To pay for their own place, Oscar and Chloe make a porno film, but it doesn't sell very well. Worried about their future, she sees a fortune teller whose news is very upsetting. It propels her to marry Oscar and to hope for the best.

Bradley decides what he needs is a new house. He falls in love with Diana (Radha Mitchell), a real estate agent, who sells him a house next to Harry's. Unbeknownst to him, she has been having a long and passionate sexual affair with a married man (Billy Burke). Diana has a cynical view of love whereas Bradley thinks that love is the most meaningful thing about living. After they marry, Harry tells his friend that his wife thinks the house is haunted: three couples all broke up after living there a while. It doesn't take Diana very long to realize that she is still in love with her lover. Bradley finds himself jilted again; he takes it all very badly and tries to hurt himself: "I wanted to feel in my body as much pain as I feel in my heart." But at the hospital, he meets a kindly nurse (Sherilyn Lawson) who listens compassionately to his story of woe and disappointment.

Feast of Love, a positively enchanting romantic drama, is one of the best films of 2007. Veteran director Robert Benton (Kramer vs. Kramer) has taken the 2000 novel of the same title by Charles Baxter and created a touching, sophisticated, sexy, and thought-provoking meditation on love. In one of the many magical moments in the film, Harry notes wistfully that when one feels truly loved, the heart opens to others, even to those who have left us for another. The great Buddhist monk and spiritual teacher Thich Nhat Hanh has written:

"How can we help our hearts to grow every day, to be able to embrace everything? The Buddha gave a very beautiful example. Suppose you have a bowl of water and someone put a handful of salt in the bowl of water; it would be too salty for you to drink. But suppose someone threw a handful of salt into a clear mountain river. The river is deep and wide enough that you can still drink the water without tasting the salt.

Feast of Love is one of those extraordinary films that seems to get better and better as we let it seep into our consciousness. Besides saluting the beauty and the bravery of love, it reveals the mysterious ways in which life's surprises help us grow a bigger heart. 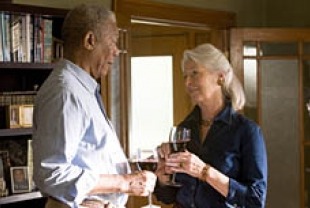 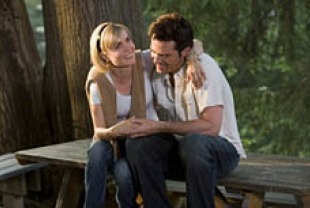 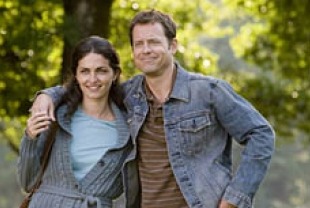 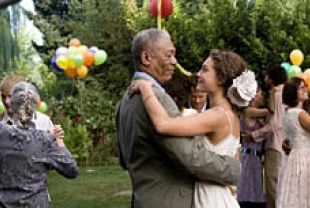