Directed by Tony Gilroy
A poignant and powerful thriller about corporate malfeasance that reveals what it is like to face life-shattering moments.

Michael Clayton (George Clooney) is a 45-year-old "fixer" for one of New York City's largest and most powerful law firms. His boss, Marty Bach (Sydney Pollack), sees him as an invaluable asset to the company who can always be relied upon to take care of the loose ends that are part and parcel of running such a large and successful firm. Michael has a much less vaulted view of himself: he is not a "miracle worker" but a "janitor" one who cleans up the messes. In spite of his 15-year tenure, he has not been promoted to partner and there is little reason to think that he ever will be. Worst of all, Michael, who has a serious gambling addiction, started a bar which his alcoholic brother ran into the ground, leaving him with a $75,000 debt to some unsavory characters. Michael sees that his life is a shambles and his "walk-away" money gone. No wonder he is nervous about the future and upset about the past.

Marty Bach is working around the clock on a merger and assigns Michael to handle the meltdown in Milwaukee of Arthur Evans (Tom Wilkinson), one of the firm's top litigators. He's stripped himself naked in a courtroom but that's not the real problem. The problem is that he has become convinced that U/North, the multinational conglomerate he represents in a multimillion dollar class-action lawsuit, is guilty of ethical malfeasance on a grand scale. Karen Crowder (Tilda Swinton), the agribusiness's chief counsel has hired some men to monitor Evans' activities, and they begin to also note Michael's visits to him. After his friend is killed, Michael picks up the trail of details leading back to U/North's egregious wrongdoing with some toxic chemicals foisted on farmers and the general public.

Writer and director Tony Gilroy has made a crackling good thriller that is relevant to the times when more and more corporations are willing to jeopardize public safety and welfare in the name of profit. Such companies expect to be able to use their power and wealth to cover-up wrongdoing; their worst fear is the emergence of a whistleblower like Arthur Evans.

George Clooney gives a top-drawer performance as Michael Clayton, a former prosecutor from a working-class neighborhood. In a poignant scene which sums up this character's anger at who has become, he listens to the plight of a rich hit-and-run driver who berates him for not coming up with a painless and carefree handling of his situation. As a single parent, Michael loves his young son but feels disconnected from him thanks to a career that demands all of his time and effort. His involvement with Arthur arouses Michael's conscience and for the first time in years, he sees things with a moral clarity and knows what he must do.

The other standout performance is by Tilda Swinton as Karen Crowder, U/North's in-house chief counsel. She has worked her way up the corporate ladder and is awaiting a successful outcome in the class action suit. When she finds out that Arthur has turned against her and the company, she realizes that something has to be done about him since three billion dollars are at stake. Ambition is a terrible force when enslaved to money and power. Her own meltdown in the face of fear is something to behold. This thriller hits the emotions like a hurricane and reveals what it is like to face life-shattering moments. 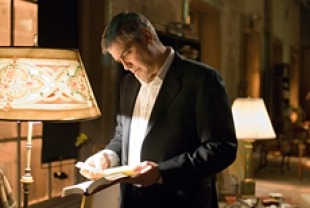 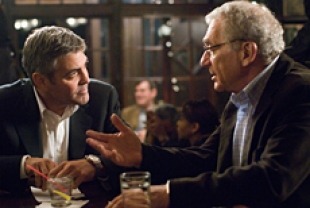 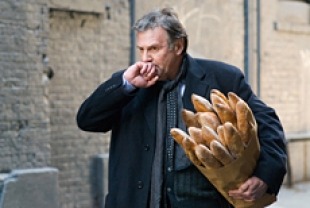 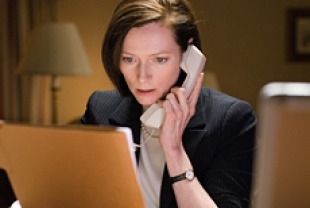 R - language, including some sexual dialogue