Directed by John Madden
A beautifully realized tribute to the rush of imagination as one of the great creative force fields in the universe.

"Imagination is creativity," Thomas Moore has written, "and the way we make our world depends on the vitality of our imagination." In 1593, playwright William Shakespeare (Joseph Fiennes) is overshadowed by a competitor, Christopher Marlowe (Rupert Everett). He is also smitten with writer's block and is getting nowhere with a new play for a besieged theatrical producer (Geoffrey Rush) who's being squeezed by a moneylender (Tom Wilkinson).

All that changes when he meets Viola (Gwyneth Paltrow), a stunningly beautiful heiress who shares his yen for poetry and his passion for the theatre. She becomes his muse and the inspiration for Romeo and Juliet. Only trouble is, Viola's father has arranged for her to wed Lord Wessex (Colin Firth) in a marriage that has the backing of the imperious Queen Elizabeth (Judi Dench).

John Madden (Mrs. Brown) directs Shakespeare in Love with great elan, drawing out all the snap, crackle, and pop of its mistaken identities, rowdy brawls, rule-breaking adventures, and comic reversals. The lively and literate screenplay by Marc Norman and Tom Stoppard accentuates the link between love and boundless creativity. Once he's swept away by Viola, Shakespeare's imagination is wildly, fiercely alive with a profusion of intense and phantasmagorical ideas and images. This engaging drama reveals that geniuses are able to use anything and everything to cobble together a masterpiece.

Shakespeare in Love is a beautifully realized tribute to the rush of imagination as one of the great creative force fields in the universe. The film won seven Academy Awards including Best Picture, Best Actress (Gwyneth Paltrow), Best Supporting Actress (Judi Dench), and Best Writing Directly for the Screen (Marc Norman and Tom Stoppard). 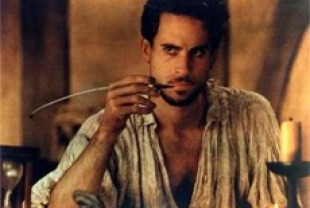