Directed by Jonathan Demme
An inspiring documentary about former President Jimmy Carter where he puts on display his political wisdom, his Christian faith-based service, and his emotional literacy.

Jonathan Demme has made an inspiring documentary about former President Jimmy Carter's 2006 book tour for Palestine: Peace Not Apartheid. In his hometown of Plains, Georgia, this sprightly 82-year-old still teaches Sunday School in his Baptist Church and talks as a peanut farmer about how dear to his heart is the fertile land he owns. He stays in top physical condition by regularly swimming.

Carter's Christianity animates his service to the world. We see him building a new house in New Orleans with Habitat for Humanity. He speaks out against the disgraceful response of the Bush Administration to the poor people who have suffered so much in this city. Later we see him at a meeting at the Carter Center, his nonprofit organization that addresses national and international issues of public policy, focusing on resolving conflict, promoting democracy, protecting human rights, and preventing disease and other afflictions. His voice breaks and his eyes tear up in gratitude over the idealism of interns in the program. We are impressed by both is political wisdom and his emotional literacy.

Most of the documentary revolves around the former President's book tour in New York, Philadelphia, Washington, Chicago, and Los Angeles. He argues that Israel will not achieve peace until it withdraws from the occupied territories. Naturally, television commentators and talk show host bring up the negative responses to the book by Jewish leaders and their supporters. Carter reminds his audiences that he is more than anything else a believer in peace in the Middle East and the accord that he negotiated between Israel and Egypt has stood the test of time. Some of those receiving signed copies of his book commend him for speaking out on behalf of the Palestinians.

Carter's faith has made him into an articulate spokesperson for peace and the poor. His practices of kindness and generosity are evident everywhere on his book tour from his treatment of the Simon & Schuster publicist to his friendliness to fans and the make-up artists who prepare him for television talk shows. Jimmy Carter Man from Plains is a top-drawer documentary about a true spiritual leader in America. 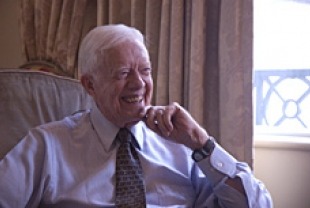 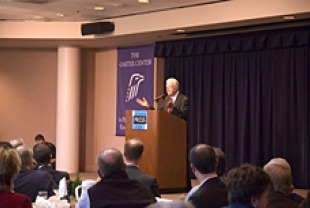 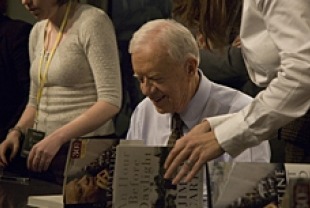