Directed by Elie Chouraqui
A hopeful movie that depicts the friendship between a Jew and an Arab that outlasts the culture of revenge and racial hatred surrounding them.

O Jerusalem presents an unbiased overview of the historic struggle between the Arabs and the Jews in the battle for control of the holy city from 1946 to 1948. The drama is based on the bestselling novel by Larry Collins and Dominique Lapierre. To all those — Jews, Muslims and Christians — who yearn for peace in Jerusalem, this is a hopeful and helpful movie that points out that the ties of brotherly love can outlast the winds of war and overcome the culture of revenge and racial hatred that animates the conflict between Israelis and Palestinians.

Bobby Goldman (J. J. Field) is an American Jew who returns to New York City after serving in World War II. He meets Said Chahine (Said Taghmaoui), a young Arab from Jerusalem. They become good friends and over the years, despite all the turmoil and violence that could tear them apart, maintain a bond that is true and deep.

Said's family is in Palestine, and his uncle, Abdel Khader el-Husseini (Peter Polycarpou), wants him to return to protect the family's land from the Jews, who are arriving by the boatload to take up residence in the Holy Land. Meanwhile, Jacob, a Zionist in Bobby and Said's circle of friends, wants to go to Jerusalem to join in the fight against the Arabs. Bobby goes along and is welcomed by Said. In a crucial scene, they stand together on a hill with a full view of the holy city. Said says, "If God is not here, he is nowhere."

But before long, armed conflict has broken out between the two groups claiming rights to the city. In a demonstration against the British, Jacob is killed. Later, Said's brother dies in his arms after the Arabs' headquarters is bombed by Jewish forces, and he vows to avenge his death. Bobby becomes a leader in the Haganah, Israel's small but growing army populated by new immigrants.

Some of the crucial events in the drama include documentary footage of the November 29, 1947, vote in the United Nations General Assembly for the mandatory division of Palestine into a Jewish State and an Arab State with an international statute for the region of Jerusalem and Bethlehem. Other key scenes include: Golda Meir (Tovah Feldshuh) trying to convince King Abdullah of Transjordan to help avert a war; the Palestinians asking representatives of the Arab League to give them the arms and support to drive the Jews out of Jerusalem; the British high Commissioner Sir Allan Cunningham giving the keys of the Old City of Jerusalem to Rabbi Weingarten; the discovery of the bodies of 254 civilians massacred in the village of Deir Yassin by terrorists of the Jewish Irgoun and the Stern Group; Ben Gurion (Ian Holm) announcing the statehood of Israel; soldiers from the Arab Legion entering Jerusalem; and the Israeli army in Latroun successfully opening the road so supplies can get through to the trapped Jews in Jerusalem.

Perhaps the most touching sequence of all is the depiction of the ceasefire mandated by Western powers on June 11, 1948. One minute Arab and Jewish fighters are shooting at each other, and in the next, they are embracing and taking care of each other. Unfortunately, this cease fire lasted for less than a month. The film ends with an invocation from the Psalm of David: "Call for peace in Jerusalem. May peace reign on its ramparts and posterity in its palaces." 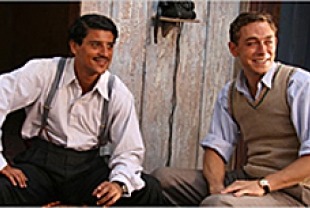 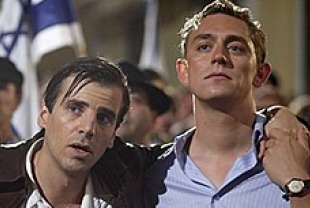 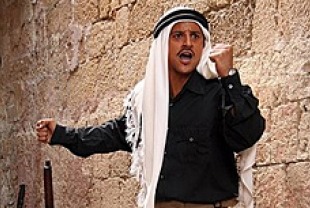