Directed by Guy Moshe
A bleak film about an American who tries to rescue a 12-year-old Vietnamese girl from Cambodia's sex trade business.

In June 2006, Cambodia was ranked as one of the world's worst centers of human trafficking. A U.S. State Department report, published annually, stated: "Cambodia is a source, destination, and transit country for men, women, and children trafficked for the purposes of sexual exploitation and forced labor." It also noted: "Corruption, lack of training, and funding for law enforcement, and a weak judiciary" block the way for the country to eliminate its slave trade. The mass poverty of the region and an exploding population are two other factors that contribute to this depressing scenario. A traditional Cambodian proverb goes: "If Heaven could cry, then Cambodia would never know drought."

Patrick (Ron Livingston), an American, has spent the last 15 years as a card shark and small time hustler in the Cambodian capital of Phnom Penh. He does various projects for Freddie (Chris Penn), a Bangkok wheeler and dealer. While he's doing an errand for him, Patrick finds himself in the infamous K11 red light area of the city. There he meets Klaus (Udo Kier), an attorney who sees the place as the portal to heaven. Here men for a price can fulfill their wildest sexual fantasies.

Patrick is repulsed when a little boy takes him to a cramped residence where parents offer their five-year-old girls for him to do with whatever he wants. At the place where he is staying, he meets Holly (Thuy Nguyen), a 12-year-old girl who has been sold by her Vietnamese family into the sex trade. She is worth a lot of money because she is still a virgin. The tough and cruel woman who runs the brothel has had trouble with Holly, who has tried to escape. Even though the girl believes that her karma has brought her bad luck, she dreams of returning home to Vietnam.

Guy Moshe directs this grim drama which was filmed on location in Cambodia. The film is part of the K11 Project and the Redlight Children Campaign which was started in 2002 after Guy Jacobson, the producer and co-writer of Holly, was propositioned in Phnom Penh by young girls, some of them only five years old. Shortly afterwards he began organizing a group of advocates determined to protect children in danger of becoming part of the global sex trade. Holly is the first of three films designed to raise the consciousness of people around the world to the scourge of child trafficking and child prostitution.

Patrick's attempt to save Holly from a life of slavery and exploitation leads him into an adventure that requires him to summon inner resources which he thought he had lost. His confrontations with some tough guys from the brothel and several corrupt cops only reveal how dangerous the human trafficking networks are. Patrick meets Marie (Virginie Ledoyen), a crusading woman who runs a center for children rescued from the slave trade. When he tells her that he intends to purchase Holly and set her free, she says that would only validate the business end of trafficking. When he mentions the option of taking Holly with him to the United States, she replies that the U.S. will not let him adopt her. Marie concludes that although Patrick has already done what he can for this little girl, it will take five years for her to deal with the trauma, the heart break, and the exploitation she has endured.

The idea of letting go does not appeal to Patrick, who has grown emotionally attached to Holly. So he does what he believes be the right thing. It doesn't turn out the way he expected it would. Holly is a bleak film about a subject that is finally getting the attention it deserves by filmmakers. 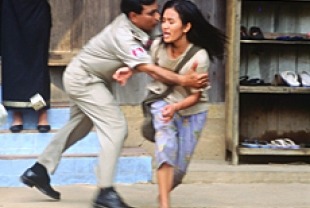 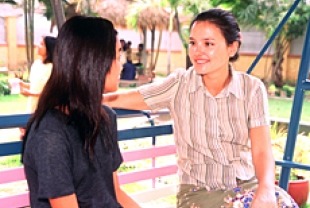 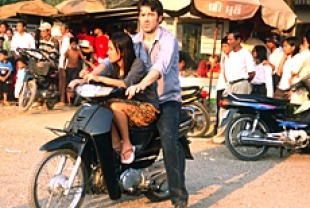