Directed by Paul Schrader
A morally charged drama about the nasty games played by the rich and the powerful in Washington, D.C.

Carter Page III (Woody Harrelson) comes from an illustrious Virginia family; his grandfather was a governor, and his father was the Democratic senator who helped nail Nixon during the Watergate investigation. Carter works one day a week as a real estate agent and spends the rest of his time as "a walker," an unpaid escort of the wives of rich and powerful senators and lobbyists. He entertains them with his wit and gossip at their regular canasta games. The women who enjoy the pleasure of his company are Natalie Van Miter (Lauren Bacall), Abigail Delorean (Lily Tomlin), and Lynn Lockner (Kristin Scott Thomas). Carter, who is gay, has a lover, Emek (Moritz Bleibtreu) who is a tabloid paparazzo and an avant-garde artist. Back at his own luxurious apartment, Carter fastidiously puts away his wig, along with his fashionable wardrobe.

Carter's world collapses one quiet afternoon when he drops Lynn off at her lover's apartment and she finds him stabbed to death. Knowing that her presence at the scene of the crime will bring down her husband (Willem Dafoe), the Senate minority leader, Carter nobly volunteers to call the police and be the one who found the body. However, this act of chivalry causes him a lot of discomfort and anxiety. The police suspect him as the killer and a power-hungry federal attorney (William Hope) takes great pride in humiliating him (he even brings up how Carter got to go to a better private school than he did). At this point, Emek uses his research skills to uncover information about Lynn's lover, a lobbyist involved in some unsavory deals that could embarrass the Vice President.

Writer and director Paul Schrader sees The Walker as the third in a series of moral dramas: American Gigolo and Light Sleeper. Here the ethical challenge comes when Carter squares off against the shadow side of his family's legacy and all the time and energy he has put into serving the rich and the powerful. Woody Harrelson delivers a stellar performance as the witty walker who at one point says of himself, "I'm not naïve, I'm superficial." The film does a fine job conveying the corruption and the paranoia of the Washington political scene.

Special DVD features include the making of The Walker, a theatrical trailer, and a trailer gallery. 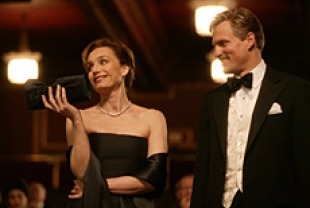 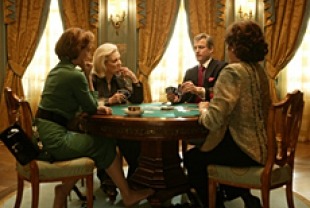 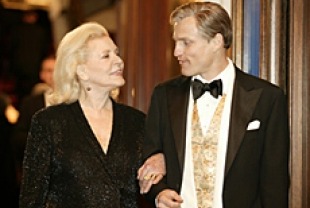